William Longman Author of The Dragon Among Us 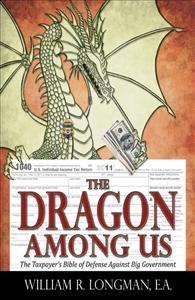 Today we're featuring an interview with William Longman, author of The Dragon Among Us. Our author interview series provides an opportunity for our readers to get to know our authors on a deeper level and also learn more about the types of books we're publishing.

William Longman E.A was born in New York City and brought up on Long Island. At the age of seventeen, he went into the U.S. Air Force where he eventually was involved in an airplane crash into the side of a mountain. William lost his sight and was medically discharged from the Air Force.

During the long recovery and struggle to regain my sight, it accured to me the Military had no use for me and only wanted me to go away.  They accused me of anything and everything.  They kept me on Morphine way too long, the hospital was just storage place for me until they could get rid of me.

I got the impression that I was no longer needed and that big government could care less if I lived or died.  Big government became my enemy for its wasteful practices and no regard for life. I became obsessed with the notion that the bigger government got, the less they cared about the people.  The more liberal they got, the more greed they showed.  The more programs they had  for the poor, the more graft they could hide.  The only answer I could come up with was taxation.  Back then, taxation almost amounted to graft.

In the sixties and into the seventies, I was just starting to get some sight back.   I engulfed myself into studying the Tax Code and court decisions related to them.  I was able to learn the Tax Code and memorize most of it.

If I could get the answer to the taxes, I would be on my way to stopping the graft.  I started out by studying accounting, than studying the field of taxation.  There I found the answer.  The federal government was so tied up in double standards and legalize that it couldn’t function effectively, leading the way to graft and corruption.  I dedicated my career (what I had left) to helping the common man on the street with his tax problems.

With the help of friends, I obtained my CPA license in California, then my Enrolled Agent license from the Internal Revenue Service.  I was on my way.  President Ford asked me to become part of his Tax reform committee, which I  accepted.  After which I was able to go to Stanford University and graduate in administrative Tax Law.

The Internal Revenue Service has always operated as if there was no effective  constitutional guarantees.  Congress has always had to ride hard on them, making them abide by the Constitution.  Congressional action has always been to corral them in.  The number of laws enacted to control IRS each year is perpetual.  Until the last few years, where Congress has slacked off.  Congress is no longer defending us.

President Obama ran on the promise of protecting the little guy, the blacks, and the poor.

He promised redistribution of wealth.  He promised affordable health care.  He delivered four years of recession, unemployment, skyrocketing costs of health care, a shortage of Doctors and nurses, rising taxes, and cut backs in social services and Medicare.  Look out for the next four years.

This book has the laws in defense of the taxpayer.  A proven method of defense, and who can legally enforce them.  It describes the various professions and what their limits are in each case.  Case history is given via true case examples and results.

I started on a mission to corral the IRS.  I became an Enrolled Agent (explained in the Book).  After my aircraft accident, I was on a  full disability pension.  The military and the V.A. were less than helpful, they squandered money but refused me the needed medical attention. It  was many years   before I received the treatments that restored my vision.

What other books are most similar to yours?

I have never seen any thing like this book.  That’s why I wrote it.

Why should readers pick up your book?

I tried to put together a book that had some meat to it, with the current laws and court actions where they can be  applied in defense of actual case law. Actual audit procedures and suggestions to win cases before the IRS and appeals.  An attitude for winning cases. From “The Bridge Act” of 1884, Congress which appointed the “ENROLLED AGENT”, to the recent appointment of the “ U.S. TAX  COURT  PRACTITIONER” by the U.S. Tax Court.  Now we have two federal appointments in the field of taxation.  We are still a Democracy governed by a constitution of rights and responsibilities despite President Obama.

A real world exposure of how our Government works from behind the scenes.  How to make use of your rights and make an honest report of your income with as little tax as possible.   I hope it will become the “bible” which everybody uses to defend themselves against IRS.   A practical everyday guide to living in the United States.

How long did it take you to write your book?

About forty years experience and fifteen years of writing.  Without the experience, there would be nothing.  I’m continually amazed by the travels, people, the experience that I’ve had in my career as an Enrolled Agent of the U.S. Treasury.

Congress accepted  the Enrolled Agent as a Congressional appointment in 1884,

U. S. Tax Court recently Appointed the “ Tax Court Practitioner” as representing the taxpayer’s attorney in the Tax Court. Neither of which have been publically admitted before.

List three adjectives that describe your book as a whole:

The Constitutional responsibilities of the Citizens of the United States.

History of taxation from biblical times to present.

I was inspired by President Ford while writing the 1976 Tax Reform Act.  He commented that I personally needed to write of my personal experience with the Tax court generally.

While working case law, what is wrong with current law?  Why tax court cases sometimes don’t make sense !  I’ve been known to carry cases too far.  I’ve taken cases from the courts to Congress to redress a known injustice.  Many cases I’ve addressed in the writing of the 76 Tax Reform Act were from prior personal cases.  Many suggestions in the book came from field experience.   While operating inside the Court system I get suggestions of what would make the case go smoother.

How do you research your books?

I personally start with the Constitution.  If it’s there, case closed.  If not, I look in the US Code 26, Internal Revenue Code.  Next is court procedure, then IRS Regulations.  Most people would look to regulations first, but that is wrong.  Court trumps regulations. Code trumps court. Congress trumps court. Supreme Court trumps Congress.  The Constitution should trump Supreme Court.

Why do you write? Is it something you’ve always done, or always wanted to do?

I’ve always been intrigued by our Constitution.  How it was written, and the wisdom of those who wrote it. At the time of its writing, what was the prevailing fear?  Now, two hundred years later, what would be an outcome of a constitutional convention?  Could we have as cool an assembly of men?  I think not.

Research the Code, then write it, it’s contradictions and all.  Honest opinions included.

If you could visit a place for research, where would it be?

Why the Library of Congress of course!  I’ve been there, done that.  It’s the coolest place for research there is.   I’ve spent many hours and days in the tunnels below the library.  Try copying an old manuscript with a 25 Watt bulb as light.  I had Pres. Ford’s permission, but still had to meet the library requirements.  What a fantastic place to study. With resources all around you, anything you wanted to know was there, and the help was great.  The librarians were more interested in helping you than in their time.

If you were told your stories were unbelievable and no written very well, would you continue to write? What would your response be?

True life cases are unbelievable by the most part.  Only the most outlandish stories have any interest anyway.  Why cares to read about the mundane or average case anyway.  I tell it as I see it.  The interesting cases that can change people’s lives.  Case law, as I see it, is to illustrate a point of law.  To make a case for the taxpayer’s side, to show that a case can by made in the taxpayer’s favor.  Not every case will work out, but good representation is a must, and is available  at a lower cost by knowing who can handle your case.

Who or what inspired you to become a writer?

My grand father, who left Longman Publishing Co. To come to the U.S.  over a century ago.  He was hired by the New York Times about 1890.

I was born in New York City, moved to Sayville, Long Island in 1937.  Where I grew up. Graduated from Sayville High, went into the Air Force after school, and crashed the airplane.

After the accident, still hospitalized, they transferred me to Edwards Air Base to a dryer climate and I settled in Lancaster California.

After getting credentialized, I went to work for an Attorney, the case was in Mexico City, Mexico.  I found out that my credentials were worth more on foreign soil than U.S., Interesting.

Although I’ve basically had my own practice through the years, doing income taxes and audits, I’ve almost always been in practice with attorneys.  The law firm would handle filing of Petitions etc. and I would appear with the attorney in tow.

When you’re not writing, how do you spend your time?

When I’m not out chasing rainbows and other things, I enjoy flying (more chasing rainbows), Kayaking, (watching the birds go by), biking, and maybe skydiving (dreaming).

To order a copy of The Dragon Among Us go to www.buybooksontheweb.com.

END_OF_DOCUMENT_TOKEN_TO_BE_REPLACED

Topics: the dragon among us, william longman, infinity publishing, self publishing, author interview