The Pirate Effect: What to Do if Someone's Stealing Your Book

If you write long enough and publish enough books, sooner or later it's going to happen. Someone will approach you online and tell you that they saw one of your books being offered for free. Congratulations, you've made it! You've become popular enough for pirates to want your work. In essence, the owners of these sites are stealing your work and giving it out, Robin Hood-style. The problem with this is, unless you're a millionaire best-selling author, that's a lot of money you're going to miss having in your pocket. How do these pirates work? Is there anything you can do to stop them? 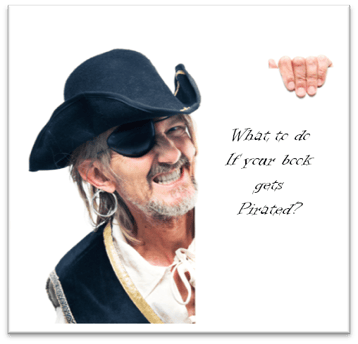 Everyone who saw the beginning of the digital music revolution is familiar with Napster. This site allowed users to upload music that was recorded on their computers, "sharing" it with anyone else online who wanted it. Musicians were outraged at the theft, and rightly so. Bands sued, courts weighed in on the concept, and Napster was eventually shut down. That particular company may no longer be earning money from user-submitted work, but the concept of creative piracy was born.

Once eBook readers became popular, the pirates found a new profitable commodity. The ease of use with most readers made it simple for sites to allow even the most casual of users to share the wealth and upload copies of their expensive eBooks. The concept has exploded, with most of the sites registered offshore in countries that don't prosecute for American copyright laws.

Finding your books online can be a full-time occupation. Do a search for free books and you'll find some of the sites. Keep your eyes open on social media and in writer's groups and you'll find others. Most writers share the information whenever they find it -- no one's happy to see their work put up for free.

There are two schools of thought when it comes to dealing with book pirate sites. In the first viewpoint, you can consider the people who download your books for free as people who wouldn't pay for them, anyway. At best, they might get a free book or two, then like you so much they'll pay for more books in your catalog. If they weren't honest enough to buy your books in the first place, you're not losing any money. They're not your audience. Don't stress about it, and just let karma take its course.

If you want to take a more active role, you can file a DMCA, or a takedown notice, to the pirate site. You'll have to file a new one with every site you find, and the sites often upload new copies after they take the old ones down. Some authors compare it to playing whack-a-mole. Knock one down and another one pops up. You can make progress, and get satisfaction from cutting into their profits, but it can take a huge amount of time. You'll have to decide how much you want to invest, either yourself or by hiring someone to do it for you.

Once you've decided to get active and go after the pirates, you'll have to file takedown notices according to the rules laid out by the Digital Millennium Copyright Act. You do this through the website at dmca.com. There are two methods to filing: the do-it-yourself version or the automated one in which the DMCA organization does all the work for you. You'll have to figure out how much your time is worth. With the automated version, professionals will handle all the details for $199 per instance. If you'd rather do the work yourself, you can use their tools to follow up on your work for $10 a month or $100 a year. Battling large pirate companies can involve lawyers and other expensive experts if you're not well-versed with the law, but if you have multiple sites to send notices to the monthly option might work best. The  DMCA site is very user-friendly, no matter which option you choose. Depending on your projected royalties or indignation factor, filing a takedown notice may be the right move for you.