All in the Voice: Choosing the Right Narrator for Your Audiobook

Experts are predicting that audiobooks will be bigger than ever in 2018 and beyond, giving authors a chance to earn even more money from already-published works. If you're considering turning some of your work into audiobooks, the most important decision you'll probably make is who to use as a narrator. As anyone who listens to audiobooks knows, the right voice can make or break a story. Choose the right narrator and you can get hundreds or thousands of new fans for your work. Pick the wrong one and you'll see a long list of returns, costing you more money every day. Luckily, there are some things you can do to increase the odds of having a popular audiobook, and they all come down to preparation. 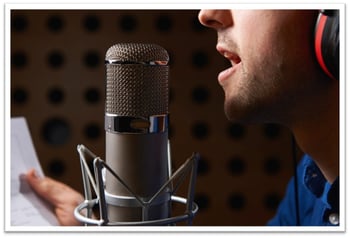 When choosing a narrator for your audiobook, you'll have to submit a sample portion of your book for the candidates to read. Pick a section of your work that represents the main feeling of your book. Include paragraphs with dialogue as well as narration. If you want your narrator to convey a lot of emotion to your fans, submit a script that includes a strong emotional scene.

Narrowing Down the Choices

You'll likely get a wide variety of voice types to choose from, and the hard part is usually picking the right one among a group of likely candidates. If a narrator doesn't sound like a good fit within three or four minutes of listening, they probably won't hook your readers, either. It's possible that you'll find the exact right voice right away, but it's more likely that you'll find a few that could all fit equally well.

Once you have a core group of possible candidates, listen to some of the other voice work they've done. Listening to other audiobooks by the same narrator will give you an idea of how they pace stories, how well they switch characters from scene to scene, or even if they have annoying habits such as strange breathing noises or working in a room with an echo sound. If a candidate is constantly mispronouncing common words or struggling to add enthusiasm where it's needed, their other work is a great place to discover it.

A solid group of three to five candidates is a good place to look for your final choice. This is where you need to look at the fine details of their readings. Pay attention to qualities like: