One of the original limitations of eBooks was after the purchaser 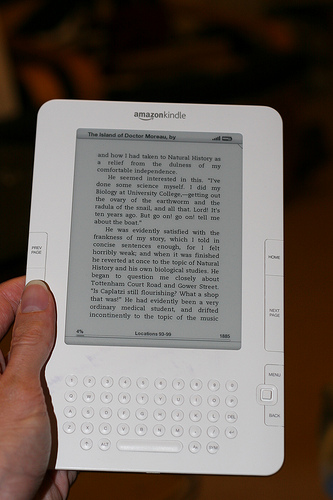 finished reading the book on their eReader, the electronic version couldn’t be passed on and shared with a friend. I’ve always considered the ability to pass a book on to someone I know would enjoy reading it, to be an intrinsic value of the book I bought and paid for. On gift-giving holidays, my son would frequently give me a hardcover edition of the latest Clive Cussler or Tom Clancy novel knowing that when I finished reading it I’d share the book with him so he could enjoy the adventure story too. Throughout the years we’ve shared books with each other—and then my son bought an early iPhone several years ago!!!

Ugh, this ended our sharing of good novels, because once he downloaded an eBook to his iPhone it was trapped in there forever. Bummer. But I still received his gifts of just-released novels by my favorite authors.

In October 2010—thanks to some found money, I gave myself the gift of a new Apple iPad. I wanted to experience first-hand what this eBook revolution was all about. The first novel I downloaded was John Sandford’s Storm Prey. Wow, reading his novel on the iPad was very pleasant and sooo easy on the eyes—I bumped the text up to 12 point type with a tap of my finger on the screen. It did seem a bit strange to turn on the iPad to read the book, and of course remembering to plug the eReader in to recharge.

My next download in early December was Tom Clancy’s new release, Dead or Alive. Indeed, a very good read, but my thoughts while reading this highly entertaining novel was I hope my son doesn’t give me the hardcover edition as a Christmas gift; and wishing I could share the eBook edition with him.

Then on December 30, 2010—as if sometimes wishes do come true, I received an email from Amazon announcing their Kindle eBook Lending Program—and as part of my research to write this article I discovered Barnes & Noble had previously launched their LendMe program in June of 2010, along with the release of their new and improved NOOK Book eReader. Suddenly eBooks downloaded from B&N and Amazon were shareable!!!

They had successfully overcome one of the major shortcomings of eBooks—the inability to pass the book you’ve just finished reading on to a friend who you know would also enjoy the book. The lending programs are rather similar—they allow the purchaser of the eBook to email a free copy to a friend. The friend will have complete access to the eBook for 14-days—plenty of time to read a novel. However, during the 14-day period the purchaser will not have access to the book, but the friend receiving the shared book will have the entire book on their personal eBook reading device. At the conclusion of the 14-days, the lent eBook is back on the purchaser’s bookshelf and fully accessible again. This also solves the problem of shared books that are never returned by the borrower!!!

There’s a more expanded report on the ramifications of these eBook lending programs in the January issue of Infinity’s Author’s Advocate—if you aren’t a subscriber, you may sign up for a free subscription by visiting www.infinitypublishing.com.