Here’s a wee bit of publishing history. Once upon a time during the colonial days in America, stationary stores and book venders would pay for the printing of an author’s manuscript under the house name of the bookseller with the books being sold in their stores. Back then, books traveled along with the official mail and size definitely mattered. So authors were the source of books for established vendors to sell, and the vendors had the money to pay the book printers, and the booksellers extended the reach of their income flow by sending copies of their commissioned work to bookstores throughout the colonies. 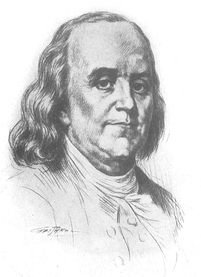 We have to thank Ben Franklin, the British colonies first Postmaster General, for putting into place the special media postage rate we enjoy today. Of my forefathers, the smartest one of all was—without question—Ben Franklin. Talk about a driving desire to publish his work! In his early teens, Ben worked as an apprentice in his brother’s print shop but his brother refused to publish Ben’s youthful writing in the weekly newspaper.

So Ben rewrote one of his early essays as a letter from a subscriber, signed it with his pen name, “Silence Dogood,” and added it to the pile of letters from readers. His unknowing brother published the Dogood letter which was received with popular acclaim by the readers. Ben wrote as and for the middle class—the common folks—and his authored words rang true with them.

Ben wisely grew to discover that he could control the commerce of his writing, because he owned the printing press and he enjoyed an established distribution network based on the fair exchange of goods and services that were mutually beneficial all the way around. But of course as Postmaster General, Ben’s books and newspapers traveled for free under what was know as the “Franklin Privilege” which continues to apply to the U.S. government today as “Franking,” along with the popular “media rate.”

He believed it was a virtue to provide public service while earning a reasonable profit. Ben was also the first postmaster to be fired from the position because he got into a serious place of disagreement with the King of England about taxation without representation—most revolting to pay and have no say!