Writers’ Groups: A Gaggle of Authors Crowing or Growing

I recently exchanged email with a publisher who had just completed an anthology for a Canadian writers group celebrating their 30th anniversary. This is a remarkable accomplishment because many writer groups have a tendency to self-destruct from within. When they first band together, perhaps meeting in the back of a bookstore, in various members’ homes or in space at a library, it is often with the worthy goal to collectively help to improve their individual wordsmithing skills. As they say, however, the best laid plans often go astray. 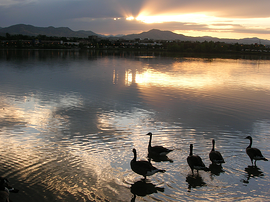 Usually there are a few members who have publishing credits. They tend to be the focal point of the group – folks want to know what they did to make the grade to be published. After all, their work has appeared somewhere in print so they must know what’s what. Overall these groups are comprised of aspiring writers eager to learn from their peers how to improve their expressive craft and have their labors of love discovered and eventually published. Problems occur when opinions on their written efforts are rendered that bruise delicate egos or their egos are over inflated with false praise.

Writers have a unique kind of courage to bare their souls and offer up work-in-progress for a collective critique by the group. Often rather mediocre work is applauded as being sooo wonderful and just too, too well expressed for words, to properly convey how good it is – when in fact it isn’t well written but is marred by a host of amateurish writing errors. Then there are the slice and dice judgments that totally shred the writer’s efforts – well, the best that can be said is the page numbers are in the proper sequence. False readings of their written words as being just too, too good or sooo very bad; leaving writers adrift in a sea of conflicting opinions that do little to provide an objective path for the aspiring writer to pursue. Bashed and shattered egos naturally cause members to leave a group – over inflated egos eventually burst.

Then writers have the problem of dealing with an onslaught of overwhelming thoughts from fellow writers as to what the woeful writer must do when they rewrite their manuscript again to make it a more compelling read, to make it more interesting, to make it easier to follow, to twist the plot in a more creative style, etc. When everyone is rendering an opinion on how to write a book it’s like a committee designing a horse – that produces an animal with the hump of a camel, the trunk of an elephant, the legs of a hippo, and the tail of a monkey. Trying to incorporate everyone’s opinion and often opposing viewpoints fails to accomplish anything except to product a horrific mess.

One of the group activities writers engage in is comparing rejection slips or not-right-for-us letters that have the dull tone of displeasing sameness. Of course in recent times the not-interested-notes arrive as impersonal emails. Thankfully in this dawning digital age of book publishing rejection is rapidly becoming a thing of the past – the opinion of the worthiness of the author’s book is determined by a mass of engaged readers and not by the biased objections of an entrenched few.

I’ve been honored to be a guest speaker at various writers’ groups scattered across the country. From what I’ve seen, the successful groups that survive the test of time are the ones with a few dynamic leaders attuned to the nuances of collective interactions, and skilled at looking for the positive points in the expressive efforts of even the newest members, perhaps just venturing into exploring the awesome art of writing a book. Sensitive leaders have the ability to quickly intervene to halt the slashing and trashing of a member’s efforts. Members of the group have developed the knack of gently pointing out the negatives but doing so in a positive and constructive manner. It becomes second nature to be considerate and respectful of the offering of others – indeed this kindness extends far beyond the circles of successful writers’ groups.