5 Things Every Author Can Learn From Jack Bauer

He's quick with his gun, he withstands torture like no other human alive, and his first motivation is always to his country. Jack Bauer, the main character on Fox's 24, is one of those memorable characters that everyone's got an opinion on. Love him or hate him, his strong personality traits can teach some valuable lessons to every author trying to make a living with their writing. 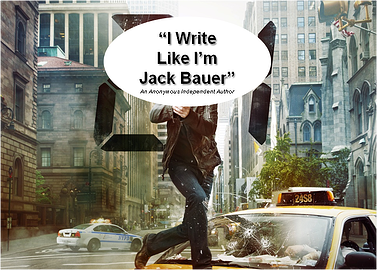 Plan for the Unexpected

Poor Jack. He starts out every day trying to live a normal, boring life, but by the end of the first hour his world has turned upside down. Friends become enemies, danger lurks in unexpected places, and evil plots are uncovered. Writers can profit from Jack's methods of always being prepared. They can learn the basics of writing, take classes to improve their skills, and do prior research to get to know the ins and outs of the publishing world.

No one rolls with the punches like Jack Bauer does. The landscape switches up on him in every episode, and he just keep rolling on. Like Jack, writers should learn to love change instead of complaining about it. It may be more difficult to get a publishing contract, but self-publishing is opening doors for millions of people.

You Can Find Allies in the Strangest Places

When her character began, Chloe O'Brien was surly, flighty, and almost useless. Through the years she's become Jack's most stalwart ally, giving him intel and cracking computers all over the globe. Writers can find help for their growing careers, from publishing advisors to other writers in critique groups. Whether it's insider tips on how to tweak a cover or direction in choosing an editor, writers can gather useful intel from unusual places when they keep their eyes open for people offering help.

Some Days are Longer Than Others

In between adventures, we assume that Jack Bauer lives a normal life, albeit one that involves tracking terrorists and keeping track of the President's movements. Once in a while, though, he'll happen upon a day that never seems to end. Writers are a lot like that. When they've got to meet their word count goals and their editor is on their back, when the words just won't come or they sound like garbage as soon as they hit the screen, days can seem like they last forever.

If Jack Bauer ever gave up the world as we know it would have ended half a dozen times or more. That perseverance, that stubbornness, is what makes him succeed despite all odds. Writers need to cultivate that same mindset. Editors may tear apart their work, beta readers may hate whole sections of their novel, evidence could pop up to disprove whole chapters of their nonfiction work. Real writers get it together, fix the problem, and carry on. Just like Jack would do.