The Breakfast of "Champion Authors": Serial Novels are on Fire!

What's hundreds of years old, yet new and trendy again? The serial novel. Charles Dickens once held fans on two continents hypnotized by publishing one part of a novel each month. In 1996 Stephen King decided to revive the art form in The Green Mile. He proved that fans didn't need their books all in one large chunk; if the story was good, they'd buy each installment eagerly at the beginning of the week, and wait impatiently until the next one came out. 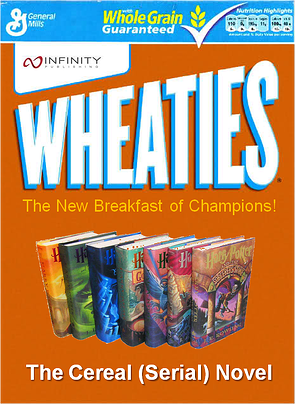 Today's serial novels are published online, in the form of short eBooks. It was revived again by Hugh Howey's Wool, a collection of five pieces that combine into one novel. Online publishing tends to be trendy, and a number of authors jumped on Howey's bandwagon. Serial novels are popular now in almost every genre, and can be a writer's best tool for increasing readership and income for self published authors.

It's all about timing and expectation. Think of it like movies vs. television series. People may watch commercials for a blockbuster movie, and even plan to see it. But once the film has shown and is out of the theaters, its impact is almost spent and the opportunity to grab new fans is tiny. Television shows, on the other hand, have new material shown every single week. They have the chance to convert new fans weekly while keeping the original fans constantly on the hook, wondering what comes next. The same concept holds for books. Publish a good novel, or even a great one, and your main exposure will last about 30 days. But if you publish a serial that the readers love, you'll have fresh exposure on a massive number of eyes for a lot longer, giving your book a much better chance of enticing someone new.

As a self published author both concepts work, as long as you keep your readers' interest. Serial novels are those broken up into pieces, usually with cliffhangers in between. Think of them as chunks of two or three chapters published as small books that combine to make a novel. Series, on the other hand, are chains of related books all about the same main character. Thriller writers have been digging this gold mine for years. Think of Janet Evanovich's Stephanie Plum or Jeffery Deaver's Lincoln Rhyme. It goes back as far as Travis McGee and even Dorothy Gale and Oz. When fans love a character, they'll buy more books to see them again.

Why do it? Increased sales, in many different ways. Fans will pay a small amount for pieces of a serial that add up to much more than the price of a whole novel. While the serial or series is trending, your readership can increase, earning more income. Plus, once new fans discover you, either in the beginning or halfway through the series, they're more likely to look at your other books and buy them, too. More pieces out there with favorite characters will always equal more sales, and more money in your pocket. Now doesn't that make total sense?

Keep the faith and may the force be with you!