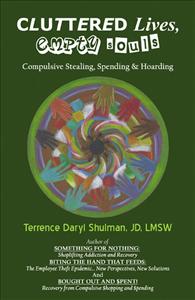 This is a book about pain: understanding our pain; healing our pain; learning from our pain; transforming our pain; helping others with their pain; being made more whole and finding peace within ourselves and the world.
This is a book about hope and faith: may you find them now.
………………………………………………………………..
Be honest, answer the following questions:
*Have you ever shoplifted or stolen from the workplace? (Hasn’t everyone?)
*Does lying or bending the truth come too easily for you? (Some call it lying, others call it creativity.)
*Ever envied the Joneses and then broke your budget? (Budget, what’s a budget?)
*Ever panicked when your doorbell rang—you weren’t expecting guests—because your home was too cluttered? (Martha Stewart doesn’t live here anymore.)
*Do you hate following rules, look for the short-cuts or loopholes, or take risks more than the average Joe/Jane? (Hey, if there’s a wall, there’s a way around it!)
If you answered “yes” to any of these questions, then this book is for you! (Of course, it’s likely everyone answered “yes” to at least one question).
………………………………………………………………..
Don’t worry: this book isn’t about religion or sin. It’s about our shifting individual and collective attitudes toward stealing, spending, and hoarding. It’s about how they’ve shifted, why they’ve shifted, and the cost to each and all of us. It’s about how more stuff makes us emptier and how less is often more. It’s about our increasing culture of corruption, “truthiness,” and envy. It’s about society’s mixed messages:
-“Be honest, but not too honest.”
-“Your only mistake was getting caught.”
-“Don’t be a spendthrift but keep up with the Joneses.”
-“Save your money but spend to help the economy.”
-“It’s only stuff but it’s too good to let it go.”
-“Bend the rules but don’t break them.”
A glance at the headline news on any given day reveals countless stories, low- and high-profile, on these topics:

Employee Theft/Credit Card Fraud/Identity Theft: The recession, technology, the Internet, and greed led the FBI to call these three of “the fastest growing crimes in America.” What’s the difference between the employee who loafs on the job (“time theft”) and the CEOs of investment firms and mortgage lenders that nearly brought down the U.S. and world economy? The employee’s more likely to get caught, confronted and fired; the CEOs are more likely to get caught, confronted and rewarded. Houston, we have a problem. TV shows such as American Greed: Scams, Schemes and Broken Dreams highlight various growing theft and fraud trends.
Overshopping/Overspending: As our government argues over how to make the smallest dent in our $14 Trillion deficit and whether to “raise the debt limit,” millions of Americans—and others around the world—suffer financial distress, random as well as self-inflicted from under-saving, overspending, and falling victim to a bad case of “affluenza.” Keeping up with the Joneses was never more epic; the new Joneses are the “stars” in the media. But even they fall prey to our culture of excess: Victoria Beckham, Nicolas Cage, Jennifer Hudson, Michael Jackson, Sarah Jessica Parker (who knew Carrie Bradshaw was no acting stretch?), and Newt Gingrich show that men and women alike get hooked. TV shows like Big Spender, Suze Orman, Dave Ramsey, and Oprah’s Debt Diet have been bellwethers of these crises.

Hoarding: When everyone and his brother bought a home before the housing bubble burst, we had to fill those homes up, didn’t we? And if there wasn’t enough room in your McMansion, have we got a storage unit for you! Or two, or three or four! The recent popularity of such shows as Hoarders, Hoarding: Buried Alive, and Enough Already! all prove clutter is king—at least in ratings-land. And for every “packrat” still hidden behind closed doors, more public faces of this disorder are “coming out,” including Micahaele Salahi, Heidi Montag and Spencer Pratt, Lisa Kudrow, Mariah Carey, Kevin Federline, Celine Dion, Marie Osmond and Paris Hilton—17 dogs counts as animal hoarding!

What do stealing, spending and hoarding have in common?

Over the last decade, I’ve counseled nearly 500 clients with various combinations of these disorders. I wrote this book, in part, to better understand and explain the underlying similarities and commonalities between them. All addictions share similar features and consequences but a few things stand out when working with compulsive stealing, spending and hoarding. On first look, all three disorders appear to focus and depend on the acquisition of things. There also seems to be a focus on money—either saving money or having more money through stealing; spending money or even getting a bargain; or hoarding money or avoiding losing money by getting rid of things perceived as valuable. People can steal, buy, or hoard money or objects from stores, work, or others. There also seems to be a preoccupation with time—and time is money: saving time by stealing, saving time by buying, saving time by hoarding and not discarding. The irony, of course, is that people who compulsively steal, spend or hoard spend an inordinate amount of time not only engaged in these activities but in thinking about doing them as well as stopping them.