The Ghosts of Company G

The Ghosts of Company G

MY FIRST DAY IN COMBAT

Our squad leader, Charley Miller, led us into the jungle. He placed me with my BAR on some 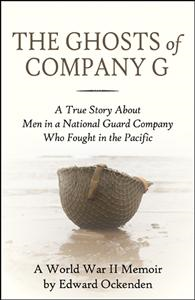 sandy soil in a small clearing, and ordered me to cover a sector from which Japanese troops might appear. My job? “If they try to come through, stop ‘em,” he said and he left.

I looked around, and could see neither friend, nor enemy. I had never felt more alone. All around me I heard continuous rifle fire, and most of it was Japanese. Why? The reason was now clear to me: from their perches high in the trees, they could see us, but we couldn’t see them. And, enemy snipers were shooting our men.

Many of their shots brought howls of shock and pain from the wounded and dying. It wasn’t like Hollywood, where actors drop dead in silence or deliver brave last words through clenched teeth. Real men sometimes scream or howl when badly hit. It is involuntary. Also, bullets don’t whine, Hollywood style, unless they ricochet from something like a rock, a tree, or a tank. Instead, as every combat soldier knows, they make a sharp crack as they pass, actually a pint-size sonic boom caused by breaking the sound barrier. It sounds like a small firecracker going off directly over your head or by your ear. And, when you hear that, they’re too close.

From time to time, a wounded American would pass me on his way to the aid station in the rear. The first was Phil, a popular, soft-spoken man. He crawled toward me on hands and knees, dragging his rifle with one hand and calling out, “Don’t shoot, I’m coming in.”

I was relieved by that, because under no circumstances could I have abandoned my post. I was part of a fire team with a greater responsibility, and all I could have done was shout for medics, which he could do for himself. From here on to the aid station, he would be safe. The enemy was behind him.

Soon, it began to rain, a light sprinkle, just enough to dampen the sand in which I lay. The gunfire continued, as did the stream of wounded GIs, walking, hobbling, or crawling past me to the rear. Then I got a sprinkling of wet sand into the action of my BAR. This could disable my gun. The BAR fires from an open bolt, which means, when the trigger is pulled, the spring-loaded bolt, with its firing pin, must slam forward in order for the gun to fire. But, sand in the works can stop the bolt in mid-travel. Result; a jammed gun and a dead BAR man. Yet, I dared not disassemble it for cleaning; what if the Japanese were to come through just as I got the gun apart? I wiped out as much sand as I could reach with my fingers and hoped for the best.

Then, from the underbrush twenty yards distant, a head appeared. Was this a friendly head or an enemy head? Without my glasses, I couldn’t tell. I thought about that wise guy who faked my eye exam before we shipped out. His false examination and faulty prescription could cause a death right now: mine or somebody else’s. Then, an arm came up next to the head and beckoned to me. We had been warned about Japanese tricks. Did this head and arm belong to a Japanese soldier? I laid the BAR’s sights on the head and, with my finger on the trigger, I waited. One twitch of the finger would pulverize that head if it should prove to be an enemy’s. Then the head rose up, followed by a full figure, and walked toward me. I shifted my aim to the chest, finger still on the trigger. Just when I could stand the suspense no longer, the head spoke. It had a Boston accent. It belonged to my pal, Terenzio. Who else could speak with an accent like that? Heart still pounding, I removed my finger from the trigger. Terenzio would live and I would never tell him how close I had come to killing him that day.

Finally, after what seemed forever, came the order to withdraw. I jumped up and started running toward the rear, and what I hoped would be relative safety. The sniper fire seemed to have slackened somewhat, though some still continued. I burst through a cluster of brush and almost fell over three bodies, piled together. I froze in my tracks and stared down at them.

Three Americans, all shot through the head by one sniper, lay in the stillness of death exactly where they fell, one atop another, in the sniper’s fire lane. The American on top wore a Red Cross arm band and a helmet bearing a large Red Cross within a solid white, circular background. He was a medic, an unarmed noncombatant.

The neat, quarter inch bullet hole, perfectly centered in the Red Cross in the white circle on the helmet belied what we had been taught in basic training at Ft. Leonard Wood, that the Japanese could not hit what they were aiming at.

I don’t know how long I stood frozen in place over those three dead men, staring in sorrow, shock, and disbelief. I don’t think it could have been more than a few moments, or I would have been the next victim. But, combat-wise 1st Lt. Andy Pepin snapped me out of my trance.

“Get out of there! That’s a hotspot,” he shouted. Get out!” I stepped around the bodies and ran for my life.

To learn more about this book or to order a copy go to buybooksontheweb.com

Bounced from New England prep school for a prank gone wrong, Ed joined Army and fought in the Pacific. While struggling to clear his jammed carbine, is shot point blank by an enemy soldier. After 14 months in Army hospitals, worked as newspaper reporter, later as writer for NYC ad agencies. Became director of an ABC radio network, built an FM radio station and went broke. Wrote 20 shorts, two novels. Wrote this book to reveal the hidden truth behind the widely misunderstood history of our Pacific war. This story is largely told through the eyes, ears and experiences of a few of the 300,000 soldiers who fought in the Pacific.