Welcome to our Author Interview series.  Today we're featuring an interview with Paul David III Author of Brave Americans.   Our author interview series provides an opportunity for our readers to get to know our authors on a deeper level and also learn more about the types of books we're publishing.

Brave Americans is a story about ten Multi-Cultural, Multi-Ethnic, yet everyday American kids who take part in a great adventure to save America for the future.  These kids all become great friends when they learn that although they may look different from each other they 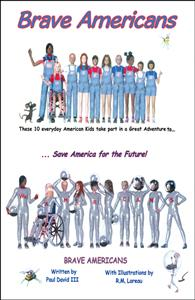 have many things in common.

Written for children ages 2-12, this book “grows” along with your child.  Included are “Fun Facts” and Teaching Tools to be used to foster learning in young children.  These stories help kids understand the moral lessons presented by the characters in the Brave American series.

RM Lareau is a Veteran of the U.S. Marine Corps whose passion in life is for computer generated illustrations.

Previous published works for Author Paul David III have been on medical topics completed while working as n Emergency Flight Nurse Specialist and a Manager of a Pediatric Intensive care Unit.  A proud mother and grandmother, David writes under the pen name of Paul David III to honor her father and brother. She holds a Masters Degree as a Family Nurse Practitioner from Michigan State University.  www.BraveAmericanKids.com

What inspired you to write this book?

When my own children went to Middle School they had their first exposure to children from different cultural and ethnic backgrounds. This gave us as a family, opportunities to learn about many different cultures and we found it interesting.  So I thought other kids and parents would enjoy learning about this too.

Who is you favorite character in your book and why?  I love all of my characters but “Fifi the Fruit Fly” holds a special place in my heart because she is so “whimsical”.

How did you name your characters? I wanted my characters to spell out “We AMERICANS” when they are standing all together.  So I chose a name that was popular in that characters culture that then started with the correct letter.

Are the characters in your books based on people you know?  No, not specifically.  I’m inspired by children in general. However, I placed the character of Abigail in a wheelchair because of my friendship with Bob, my illustrator, who has been in a wheelchair for 30 years but still has such a passion for being active and outgoing.

How long did it take you to write your book? I first thought of the idea in 1998 but I was very busy raising my 2 daughters as a single Mom and working full time as a Registered Nurse. So I just jotted down notes and ideas and tossed them into a folder. In 2004 I further developed my 10 characters and then finally in 2007, I met Bob and he was able to bring my characters to life.  We kept tweaking the story and illustrations until it became just right.  So, it took much longer than I had expected but it was a subject I felt passionate about so I never quit working at it.

Who designed the book cover?  I had a vision of what I wanted it to look like and my very talented illustrator (Robert/Bob) R M Lareau made the vision a reality.

Did you learn anything from writing your book that was unexpected? (What was it?)

During the research for the book I discovered that the “Golden Rule”, which is very popular in the Christian Religion is also present in the writings of the World’s Five Greatest Religions. (Greatest in Number of followers).  All five have a version of the Golden Rule which states: “Do unto others as you would have them do unto you”.

How do you start writing a new book? What comes first? The characters? The story?

In this instance (for the first book),the characters came to me first but now that they are developed the stories will come for the series and sequels for each character.

Where do you find your ideas?

From everyday life and watching people.  I don’t carry a notebook with me but I carry “sticky notes” then place them in a folder or book for easy reference later.

If you could visit a place for research, where would it be? My local public library (In Troy, Michigan) is a wonderful resource. We are blessed to have one of the best libraries in Michigan and I would venture to say in the MidWest.

Are there more books in the works?

I hope to have all the series written for my ten characters in the next 5 years.  That means I will need to write 2 books a year.  I have the outlines done for them already.

After researching all the choices in Publishing Companies, I felt Infinity provided me with the most complete services at an affordable rate.  And Infinity has been very proactive in connecting me to resources and getting my book to actual publication in an expedited time frame.

To order your copy of Brave Americans go to buybooksontheweb.com.