Today we're featuring an interview with Claudette Carrida Jeffrey, author of A Brown Paper Bag and A Fine Tooth Comb. Our author interview series provides an opportunity for our readers to get to know our authors on a deeper level and also learn more about the types of books we're publishing.

Claudette Carrida Jeffrey was born and raised in New Orleans’s Seventh Ward. She attended Corpus Christi Elementary School and J.S. Clark High School. Her grandfather, Louis Smith, was one of the founders of the Autocrat Club. Her great-aunt, Mary V. Rilley, was part of her extended family. Mary taught school for fifty-five years and was a great influence on Claudette’s young life. The two spent many Saturdays riding the ferry back and forth all day across the Mississippi River with lots of books, crayons, pencils and paper and a splendid lunch from Solari’s Delicatessen in the French Quarter. Visiting her hometown has always been an exciting part of Claudette’s travel life. Riding the ferry is still a thrill.

Synopsis: A Brown Paper Bag and A Fine Tooth Comb 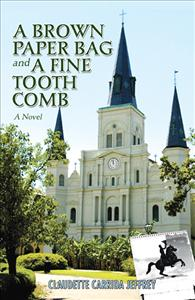 In A Brown Paper Bag and A Fine Tooth Comb, you’ll learn from the descendants of the Creoles of color that they were a people with a unique culture, language and cuisine. They were free, educated, French-speaking Catholics considered neither Black nor White.  Their men fought for the south in the Civil War. After Reconstruction when Jim Crow laws were enacted, they were classified as “Negroes” along with the newly-freed slaves. Find out how and where the 20th Century Creoles of Color lived, how they made a living and what they wanted most for their children.

There hasn't been a great deal written about the New Orleans Creoles of color - a unique culture of people who were considered neither Black nor White. In this story you'll learn how 20th Century Creoles of color lived and worked, what they ate, and what they wanted most for their children.  I think they'll enjoy watching the main character grow and change: her constant struggles and her ability to survive no matter what befalls her, her sheer determination to better her conditions and reach her life's goals, and in the face of it all, she has humor and she allows love to enter her heart.

How did your book come to life?   How long did it take you to write your book?

For years I'd written inside my head without committing my musings to paper. But after researching my family history, the characters in the story began to present themselves to me and I was forced to put the carnival happening in my head down on paper.   I wrote on and off for seven years - more off than on. Only in the last year did I work continuously on it and completed it in August 2012.

Many of the characters have the same names as the Creoles of color who lived in the 18th, 19th, 20th Centuries, as well as those of today.  I gave a few characters blended personalities, but most have original character traits composed solely for this story. Some of the experiences/events woven into the story are taken from my own life.

Did you learn anything from writing your book that was unexpected? (What was it?)

While researching the lives of the Creoles of color I learned a great deal about my own family. In my family, the old people didn't talk a lot about their past. They decided what they thought you should know. That led me to do my own family history research where I've been able to trace my great-great grandmother, a free woman of color, back to the 1850's in the New Orleans City Directories; 1840 in the Federal Census and possibly 1810 in the Federal Census which I've not as yet verified.

How do you start writing a new book?

My stories are always character-driven, so the characters come first. They roll around in my head for a while before I know who they really are and what the story is about.  I try and continue to try different types of writing, including children's books.

Can you describe your heroine?

Precocious; perceptive; persevering; A strong earnest young woman with a clear vision of where she wants to go in life.

List three adjectives that describe your book as a whole.  Can you describe one interesting scene in your book in less than two sentences?

Candid; titillating; fast-read.  The main character comes up with a way to discover what happens when a couple meets clandestinely under a tree near her home.

Having lived during the same period of time in which the book is written, I have a great deal of insight into how this particular people lived and how their society worked.

Where do you find your ideas for writing?  How do you research your books?

People watching, eavesdropping, listening to other people's stories/problems.  Especially in airports, planes, churches, small and large gatherings - it's one of my favorite past-times.   I research using the computer; interview relatives; libraries; historical collections, and travel.

Have you written your entire life? Have you always considered yourself a writer?

I've written on and off since high school.  I always thought I could write but didn't have the time to give it my best efforts until I retired.  I write to get what I'm thinking out of my head.  It's cathartic.

Undisciplined!  Sometimes mornings; sometimes afternoons.  Sometimes one or two hours; sometimes three or four.  I proofread and edit what I've written the next day.
My style:  Dialogue; brief descriptions of places/things; letting my characters' descriptions enfold little by little throughout the course of the book rather than tell you who they are and what they look like at the beginning of the story.   I like first person which gives me a chatty kind of style.

If you could visit a place for research, where would it be?

At 78 years of age, it would be presumptuous of me to talk about where I see my writing career in five years.  However, I'm working on two more books in this series, a novel I'd like to rework, a short story I'd like to make into a novel, etc.  Book two of this series - a biography of a woman who lived between 1873 and 1957.

Born and raised in New Orleans, LA. My hometown is a major character in many of my writings. All of the places I've lived, I've written about.

What is your favorite genre?

In all the books you've read. Who is your most favorite character and why?

Scrooge in A Christmas Carol by Charles Dickens. I loved the lessons he learned in order to change who he had been and who he was to become - lessons that a few of today's Scrooges need to learn.

For many years I've read self-publishing articles by Dan Poynter who's considered the "guru" in this area.  When I discovered he wrote the Forward for Infinity's publishing manual and he believed in the company, that helped me to decide.

For more information about Claudette Carrida Jeffrey and A Brown Paper Bag and A Fine Tooth Comb, visit: