The alarm was blaring. It bounced off the walls throughout the whole plant. I was driving the 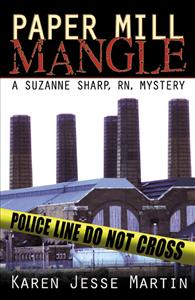 Man caught! It was going to be bad, very bad. Come on! Come on! I urged the cart, pumping my shoulders back and forth to make it hurry. But its no faster than a golf cart, top speed 15 miles per hour. As soon as I got near the stairwell under machine three, I braked the cart, grabbed my bag and hardhat, and sprinted up the stairs to the operating level. My feet were pounding and so was my heart. I jerked open the stairwell door.

One look was all it took to see it was serious. Paper machine three, as big as a freighter, was stopped. Men were running over from every direction, shouting to be heard over the noise of the alarm.

Nurse, over here. Over here. I heard my name. Suzanne, hurry. It looks bad. And I heard, Paramedics are on their way. A crowd was forming beside the three-story high, 250-foot long paper machine.

Up there. See? The man closest to me pointed. I looked up to the catwalk, where it juts out to make a platform. I could see Pete and Arnie, legs sprawled out, backs leaning against the hopper of the save-all. Pete was clutching Arnie, squeezing a rag over his bloody arm.

Looks like the auger got him, another guy near me said.

Arnies hardhat had come off, but I couldnt quite see his face. He was motionless in Petes arms. I squinted my eyes, but I couldnt tell from down where I was standing if Arnie was dead or alive. I started to sweat. The growing crowd swung to clear a path so I could get to the metal stairs, bolted like a fire escape to the side of the machine. I gripped my bag and forced my legs to hurry up the steps. I dreaded what I knew I would find.

I got up onto the catwalk. There, 30 feet in front of me, was Pete, shirt splattered with blood, sobbing uncontrollably. He looked like a scared, wet-faced boy. Suddenly the deafening noise of the alarm stopped, and we could all hear Petes words. He was rocking Arnie, wailing, Arnie, I didnt know you were there. I wouldnt have turned it on. Sobbing and rocking. Arnie, there was no lock.

Even with all my training and experience, my muscles were in tight knots as I neared the platform. I tried not to look into the hopper, but I couldnt help it. And then, when I did look, I had to swallow hard to keep from gagging at the grizzly sight. The auger had severed part of Arnies arm. I swallowed again and went into nurse-automatic pilot.

Okay. Its okay now. I kneeled down beside Arnie, still cradled by Pete. Arnie. Arnie. Can you hear me? His face was ashen, eyes closed, but I detected shallow breathing. I closed my eyes and whispered, Thank You.

In my best reassuring voice I said, Okay. Were okay now. I pulled the elastic and Velcro strap from my bag. Weve got it now. I applied the tourniquet to his upper arm. Going to be fine. Everythings going to be fine. Emergency nurse chatter. You know, the words we use to reassure ourselves as much as the patients.

Pete, keep a good hold on Arnie. Im going to check him out.

Petes crying had toned down to those jerky sobs that come after the worst sobs. His chest heaved in and out, but he said nothing as he gripped Arnies head and shoulders. I inched myself around the 5-foot square platform to get in better position. I glanced down below the platform hoping to see the paramedics. Where were they? What scared me about Arnie was the blood coming from a jagged rip in his work shirt, just above his belt. The auger must have pinched his belly. And it looked serious. I pulled his shirt away. It was a deep wound.

Pete, hand me that bag. I had some clamps in the bag.

But Pete was frozen in place. I stretched across Arnie, trying to reach the bag. I got my hand on the handle, pulled the bag beside me, and dug for a clamp. Right then several men shouted, Theyre here. Paramedics are here.

Hurry, I yelled down. Hurry. I clamped a bleeder, but I wasnt sure if that was the only one. The paramedics clattered up the steps. I shifted Pete and myself out of the way so they could start an IV and get the oxygen mask over Arnies gray face. Blood was still oozing from his belly and he had gone into shock. The paramedics quickly loaded him onto the stretcher and maneuvered him down the stairs. They headed for the back exit.

Down below the platform, among the hard hats, I spotted Dwayne Pryor, the plant safety engineer. Dwayne was young, only in his mid 30s, but he was a bully. He had a way of hassling the workers by badgering them. He was shouting. Listen up! Shut up! Listen up. Hey, you over there, pipe down. I want to know what happened, and I want to know now!

Up on the platform, I helped Pete to his feet. Even though I felt shaky myself, I had to support Pete, who was leaning his full weight against me. We began fumbling our way down the narrow steps.

Dwayne continued yelling at the workers. What was Arnie doing? Why wasnt he locked out? Dwaynes big, black-framed glasses slipped down on his nose as he snapped his head back and forth glaring at the men. Dwayne was asking the right questions, but his manner was so snarly.

To learn more about Paper Mill Mangle: A Suzanne Sharp, RN, Mystery by Karen Jesse Martin or buy a copy go to www.buybooksontheweb.com.