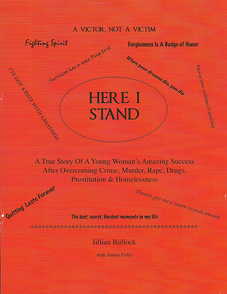 After 20 years of back and forth writing my memoir, Here I Stand, I finally got serious. I dedicated two solid years of writing three hours a day along with one year of edits after I presented my book to an editor. Although the book wasn't published yet I started getting media interviews, which garnished interest from movie producers about optioning the rights to my life story.

Here I Stand tells the unforgettable true story of my life as a young, African-American woman who defies the odds by becoming a reporter for the Wall Street Journal, an award winning filmmaker and a competitive martial artist after I overcame life with the Philadelphia Italian Mafia, rape, drug addiction, violence, criminal activity, homelessness, prostitution, and teenage motherhood.

As an independent filmmaker and screenwriter, many of my filmmaking colleagues suggested that I get the book published as fast as possible in order to do a "book/movie tie-in." I wanted to get my book published the traditional way, so I sent out numerous query letters to literary agents. I got a few emails from agents who wanted to read my proposal. Most of the agents ultimately passed. One agent, however, loved the proposal and wanted to represent me. As she worked her magic sending the proposal out to various publishers, I did some research on the publishing process. I realized if I did go the traditional publishing route it could take up to two years before Here I Stand was on the market. Thinking back to what the film folks said two years and the interest from movie producers could die.

To get my book out as soon as possible, I turned to self-publishing. After doing extensive research on companies, I decided to go with Infinity Publishing. The representative who was assigned to me was thorough, patient and accessible. In six months time I was holding my memoir in my hands. It was an absolutely wonderful feeling to know after 20 years and much blood, sweat and tears I was now an author.

With the book available, I was ready to deal with the producers who expressed interest in Here I Stand. While I tried to work a deal, which meant finding a producer/director I clicked with and who understood my vision for the film, I started doing motivational speaking. Not only was I able to share my story of how I transformed my life, but I was allowed to sell books after the speech.

Surprisingly, I wasn't prepared for people's response to my story. Yes, it was brutal and hardcore, considering my upbringing and horrific experiences, but I noticed that people were moved by my triumph of overcoming the odds. I made a point to share with people how one's past doesn't dictate what their future will be and despite the obstacles, challenges and hardships people may endure they still can go on to achieve happiness, success and greatness in life.

After one speech, a woman came up to me with tears in her eyes. She said, "I'm going to call you Dr. Jill because your words heal." With that one line my life completely changed. Afterwards, I started  getting emails, phone calls and letters addressed to - Dr. Jill. I think the woman I spoke to must have been either a great publicist or an angel. I had a moment of clarity and now I realized it wasn't just about me obtaining a movie deal for my book, it became something much bigger. In order for me to truly reach out and help people, I went on to get a certification as a Professional Life Coach. I also decided to return to college in January 2013 to begin working on acquiring a Ph.D. in Psychology, so I could actually earn the knowledge, education and title of "Dr. Jill."

When my book was first published, I never thought about how my experiences could help someone change or improve their lives. At the time I was writing more for myself. I wanted to purge those emotional demons I held inside as a result of all I've been through. Now, as I continue to look for the right home for my story with the right producer, director or movie studio, helping people has become a much more important mission for me. As I continue giving speeches and writing books, it is important that I use my words to make a difference in the lives of others.

Jillian Bullock, a former reporter for the Wall Street Journal, is an award winning filmmaker, a fitness expert, a motivational speaker, and a certified professional life coach. After graduating from La Salle University in 1991, Jillian got an internship on the set of Spike Lee's film, Malcolm X. She formed Jaguar Productions, Inc., a film and sports entertainment company in 1995. Jillian has sold two scripts, one in 2010, entitled A Champion Inside, and one in 2011, entitled A Scar Across My Heart.

She is the CEO of Jillian Bullock Enterprises, LLC, a fitness, wellness and empowerment company.  Jillian is currently pursuing a Ph.D. in Psychology and she is working on two new books, A Warrior's Heart: From Crack Street, to Wall Street, to Hollywood, a sequel to her memoir HERE I STAND, and Elite Warriors: How to Look, Feel and Perform Like an Athlete, Even if You Don't Want to Become One.

As a martial artist (she holds a black belt in Tae Kwon Do and Wing Chun) and a boxer, Jillian is also a freelance writer for several publications and writes articles on the following topics: fitness, martial arts, boxing, health, wellness, rape and sexual assault, and domestic violence. She has been featured on several TV and radio programs and interviewed for numerous magazines and newspapers, including People, Essence, Ebony, Yahoo Sports!, New York Times, and more.