In the spirit of the upcoming holiday season, we thought we would share with you a book that is all about the Thanksgiving holiday.  We hope it inspires you to celebrate what you are thankful for and give you some original holiday recipes.  History and recipes combined...it's delicious! 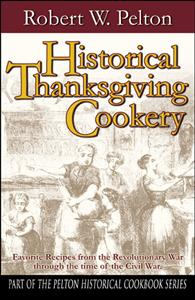 famous families of yesteryear. It contains the prized recipes for those Thanksgiving dishes served and eaten by some of the heroes of the Revolutionary War. You will be able to fix and then eat the same things served to those great men who so bravely signed the Declaration of Independence. You will be able to enjoy sharing an identical Thanksgiving meal with those who wore both the blue and the gray during the War Between the States, or as some unreconstructed Southerners still refer to it, the War of Northern Aggression.

Yes, every recipe found in this unique book was a popular favorite throughout the Thanksgiving holidays in our nation’s long and colorful history. Many were coveted within a particular family and handed down from generation to generation. Others are historical gems, for they were the inventions of, or the favorites of, some notable family or individual from the past. Here they are being presented, for the first time, for America’s families of today to have the fun and experience the thrill of cooking and baking. And lastly, to thankfully pass a blessing over before eating – be it for breakfast, lunch or dinner – on Thanksgiving Day.

Abraham Whipple gained a measure of fame between 1759 and 1760 when as a naval officer he captained a privateer and captured 26 French ships. A true New England hero, this man loved a special pudding on Thanksgiving Day made with corn meal. Here is how it was originally made:

"Rub butter the size of a hickory nut around the sides and bottom of a smooth iron kettle. When melted add some boiling water to stop the milk from burning. Now add one quart of milk. Let it boil up to top of kettle. Stir in fine Johnny-cake meal, sifting with left hand and holding the meal high so that every grain will be scalded. Stir constantly and add a little salt. Set away until cold, then add dark Molasses and cold milk and stir well. Pour into well buttered pudding dish. Cover and bake very slowly for ten to twelve hours. Serve this hot and eat with plenty of fresh butter."

Gouverneur Morris (1752-1816) was a most important delegate to the Constitutional Convention in Philadelphia. This man wrote the final draft of our Constitution and was the originator of the phrase, "We the people of the United States." Morris was a superb orator and utilized his talent while speaking 173 times (more than any other delegate) during the great debates at the convention. He is also the man who came up with the idea of the dollar being used as the basis for American money. Morris was also a highly respected member of the Continental Congress as well as a diplomat, statesman and financier. A devout Christian, he once wrote: "Religion is the only solid basis of good morals; therefore education should teach the precepts of religion, and the duties of man toward God."

Here is a special recipe for a delightful "Apple Bread" enjoyed on Thanksgiving morning for breakfast by the Morris family over a period of many years. It has been updated for today's homemaker and is easily prepared as follows:

Sift together the flour, baking powder, salt and 2 tbls brown sugar in a wooden mixing bowl. Cut in butter with a fork. Blend in raisins. Blend together in a separate bowl the beaten egg and milk. Then add this to flour mixture in first bowl. Mix thoroughly. Pour into shallow, well greased baking tin. Brush dough with melted butter. Now pare, quarter and core apples. Cut in thin slices. Arrange in rows on dough, pressing in lightly. Allow apple edges to overlap. Brush apple slices with more melted butter. Sprinkle with brown sugar and cinnamon which have been blended together. Bake at 350 degrees for 20 minutes or until apples are tender. This makes 9 nice servings. 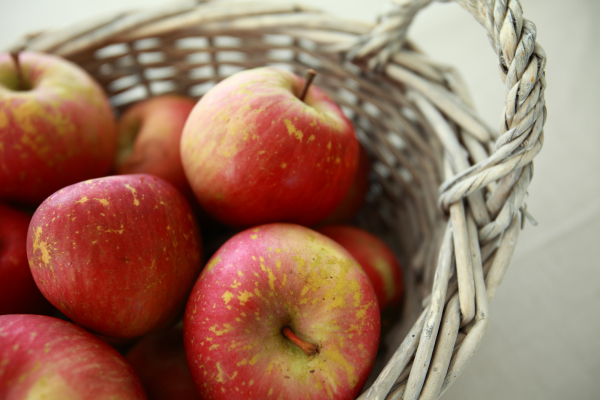 Measurements in years gone by were given in ways that present day cooks aren't at all familiar: teacupful, wineglassful, tincupful, a kitchencupful, 1/2 a tumbler, 1 dram liquid, dessertspoonful, saltspoonful, butter the size of a walnut, pound of eggs, pound of milk, gill, etc. Therefore, all the recipes herein have been carefully updated. The old measurements have been carefully converted to the measurements we now use. When the original recipe is tried today, it will turn out just as it did for the lady of the house who prepared it for her family so many long years ago. Here is a list of a few of the more interesting old measurements often used by homemakers and others during the Civil War period. The original measurement is initially given and then followed by its modern day equivalent:

Some old baking recipes might call for GermanYeast, Compressed Yeast, Patent Yeast or Brewers Yeast. Others might have been made at home using potatoes, hops or grape leaves. Such old-time recipes using homemade yeasts were made much more practical for today's homemaker by simply substituting modern versions of yeast - those small packets we can purchase in our supermarkets. But if anyone insists on trying to make their own old fashioned "YEAST CAKES," they can go ahead and try this recipe as made by my Great-great grandmother Huldah Radike Horton, famed horsewoman in her day who once had the honor of riding in a parade with the great French General Lafayette. Here is exactly how she inscribed it in her own hand in an early 1800's ledger:

"Rub 3 ounces of fresh hops until they are separated. Boil 1/2 hour in a gallon of water, and strain the liquor a fine sieve, into an earthen vessel. While hot, stir in briskly 3-1/2 pounds rye flour. The next day thoroughly mix in 7 pounds Indian meal. Form a stiff dough, kneading it well. Roll out 1/3 or 1/2 inch thick, cutting into cakes. Dry in the sun, turning every day, and protecting from the wet. If preserved perfectly from damp they will keep a long time."

As you can readily see, most early American recipes, as they were originally written, would be extremely difficult, if not in some cases impossible, to use with any degree of ease or accuracy. This can be readily attested to by the Whipple pudding concoction given above, or that given for the Yeast Cakes. Such recipes were most often written as one long and rather complicated paragraph. Sometimes they were simply a long list of ingredients with many of them unknown to today's homemakers. But in days gone by, a housewife was expected to know exactly what to do in order to achieve the desired end result.

General George Armstrong Custer (1839-76) is remembered by most people today for his feats as an Indian fighter against the Cheyennes from 1867 to 1868. His fortune was short lived though as he and his army was meticulously slaughtered by Sitting Bull's warriors at Little Big Horn on June 23, 1876. Custer was only 37 at the time of his demise. Little do most people know that this tall handsome man, famous for his head full of flowing curly blond hair, was an undeniably courageous, hell-bent-for-leather cavalry rider. Brought up in a family with strong Christian convictions, he was an 1861 West Point graduate. Custer, who fought heroically in many Civil War battles, always carried a small Bible in his saddle bag. He saw action at Bull Run, Gettysburg, Richmond, Winchester, Fisher's Hill, Cedar Creek, Five Forks and Appomattox. An astounding number of Confederate prisoners (more than 10,000) had been captured under his command!

Here is an interesting updated recipe for "Potato Butter Rolls" as they were made at Thanksgiving in the Custer household when George was but a young boy:

Put the hot mashed potatoes in a wooden mixing bowl and stir in the salt, sugar and melted butter. Set aside to cool. Then add the beaten eggs and blend well. Soften the crumbled yeast in the milk and add to the potato mixture in the bowl. Lastly, add flour, a little at a time, beating thoroughly after each addition. Turn onto lightly floured board. Knead until smooth and elastic (The dough should be as soft as it is possible to handle). Cover with a damp cloth and set in a warm place. Leave until it doubles in bulk. Then turn it out onto a floured board. Roll out into a round sheet about 1/2 inch thick. Cut into sections as you would cut a pie, having each section about 3 inches wide at the outer edge. Beginning at the outer edge, roll each section toward the center. Form into crescents. Place on well-oiled baking sheet. Cover with a warm, damp cloth. Let rise until treble in bulk. Bake in a hot oven (450 degrees) for about 12 minutes. Makes 32 delicious rolls.

To sum everything up, every recipe found in this unique cook book was popular, or at least commonly used, during the Thanksgiving holidays in the long forgotten past. Many of them were coveted within a particular family and handed down from generation to generation. Others are historical gems for they were the inventions of, or the favorites of, some notable family or family member of long ago. Here they are presented, for the first time, for America's families of today to have the fun and experience the thrill of cooking and baking. And lastly, to thankfully pass a blessing over before eating - be it breakfast, lunch or dinner on Thanksgiving Day.