Tim Sommer was drafted out of high school by the Baltimore Orioles and spent 8 years in the organization. He experienced great joys and elation as he progressed through the system, learning the ropes from experienced veterans and wise coaches. He also experienced the ruthless and heartless treatment that can come upon individuals attempting to achieve the ultimate dream. 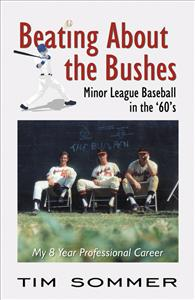 documented in the book Beating About the Bushes.  The book is published by Infinity Publishing.

The motivation for getting this personal story in writing came from Tim’s family.  As he would regale them with his endeavors in professional baseball, it became apparent that in order to record and share these life experiences, he needed to document them in a book.  That is what we are attempting to do here at Baseballisms.com, collect and curate personal baseball stories for posterity sake.

Growing up in rural Ohio, Tim was fortunate to have been discovered by a bird dog scout traveling the area looking for prospects. The scout, with a day job in a steel mill, had come across a slim kid with glasses who could fire a blazing fastball.  Upon signing his first professional contract, Tim had one thing on his mind and that was making a visit to the home of Lefty Grove.  Upon greeting one of the newest members of the brethren of professional ballplayers, Lefty took Tim into the house and spent the afternoon chatting about baseball.

Throughout the book, Tim provides a look at events and human interest stories that were transpiring during these revolutionary times in the country.  He has an exquisite tale about a hitchhiker he encountered on a roadtrip down to spring training and how they would cross paths later in life.  It is an example of the influence that baseball can have on us, no matter what life’s circumstances may bring.

Tim had numerous influences in his baseball career, including three significant managers.  His manager at Ohio University was Bob Wren.  Coach Wren had the decisive conversation with him prior to accepting the contract from the Orioles.

Within the Orioles organization there were two managers who stand out in the telling of this story.  One was a stalwart of the organization who epitomized every aspect of the Oriole legacy, Cal Ripken.  The other was with the organization for only a short period of time, had major league success with another ballclub, but unquestionably derailed Tim’s progression to the majors, Darrell Johnson.

The unfortunate incident in Tim’s professional career occurred after hearing he had made the Elmira AA ballclub.  Tim and a teammate were spending some time after hours in the local “players” bar when their skipper Darrell Johnson appeared.  Johnson was in no condition to render judgment however, as Tim points out, a players fate can be in the hands of a single individual at the minor league level.  Before anyone knew what was happening, Tim was punished, demoted and his career essentially was over.

Part of the business of professional baseball during this time period, before the amateur draft and a decade before free agency, was the Reserve Clause. Tim experienced the hardships of the reserve clause on many levels.  As a part of the Orioles organization he was in competition with some top quality ballplayers. The Orioles were renowned for their farm system and scouting.  This made it difficult for a player to advance to the major league level, however there was no real way out since the Orioles owned his rights.  Contracts also required constant renegotiation since the ballclub was under no real threat of losing a player.  During one annual negotiation with Lou Gorman, Tim asked for a raise or to be granted the rights to his contract so that he could seek employment with some other team.  It turns out that the organization was truly threatened by his stance and gave him his raise.  It wasn’t until years later that Curt Flood first took the challenge of the reserve clause all the way to the Supreme Court.

On his way out of the game forever, Lou Gorman attempted to recruit Tim into front office or field managing positions that he eventually turned down.  After all of the years on the road, away from his wife, and without the certainty of a payday every Friday, Tim decided that he was going to seek out another profession.

The final episode of Beating About the Bushes chronicles Tim’s experiences with teammate Steve Dalkwoski. The legend of Dalkowski has had an influence on fictional characters in baseball lore such as Nuke LaLoosh in Bull Durham.  Tim felt that he should include his first hand accounts in his book, as a way to correct some of the myth around the man and the player.

A documentary about Steve Dalkowski is in the works that will explore the crossroads of talent and alcohol, and will look at the “what could have been” aspect of his career.

Tim was a confidante, and trusted resource in Steve’s life based upon a simple honest relationship.

We can only express our sincere thanks to Tim Sommer for appearing on Cover the Bases.  His book is a first person account of life in the minors, and will take you on a side by side journey as he attempts to make his dream of pitching in the major leagues come true.

You can find Tim’s work at BuyBooksontheWeb.com or if you would like to get Tim to sign a copy of the book, send an email to us at Wisdom@baseballisms.com and we will get you the address for correspondence.

If you like hearing about the baseball books we profile on Cover the Bases, it might be time for you to pick up a Kindle from Amazon, so that you can take all the best Baseball Books with you no matter which stadiums you visit.

Let us know in the comments what you think about the Cover the Bases podcast. We would love to hear from you. Send a Tweet to @baseballisms with a quick message, send us an email or visit our Upload page with a video message.  We look forward to growing a community of fans interested in the poetry of the game of baseball!