Ghost Stories and Other Tales of Lansdowne

Just in time for the Halloween season, Ghost Stories and Other Tales of Lansdowne by Albert Them is filled with fourteen delightfully original stories are variously whimsical, touching, and terrifying. These stories deal mainly with ghosts, but the occasional windigo, ghoul, wolf, or monster ensures the reader is in for a well-chilled spine. The gently eerie wit of some of the stories will appeal also to children, whose suspicion that having to cope with a monster under the bed, for example, or not knowing for sure who among us is a real ghost is scarier than grownups might admit. Readers who have not heard of Lansdowne will also enjoy discovering the idiosyncratic charm of an old town, and borough residents will have fun recognizing familiar landmarks.

Book: Ghost Stories and Other Tales of Lansdowne

Author: Albert Them
Book Preview: from The Ghost of Shadeland House

Everyone knew Shadeland House in Lansdowne was haunted. The knowledge did not seem to 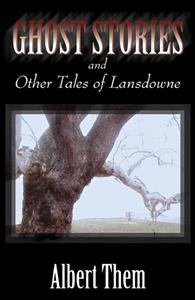 bother Rhoda Herring or her sister Vita, who were playing kickball on the lawns in front of the old Victorian mansion. The girls were certainly not frightened, and neither was Morty Specter, a boy of about ten who reached out to catch the ball Rhoda had kicked in his direction. Focused on the ball and without a glance at the boy, Vita intercepted, and Morty turned to stare at the grounds surrounding the house where no one lived.

He leaned against the black metal fence and stared at the broad wooden staircase that led up to a wraparound porch and an ornate wooden door with the letter "S" carved on its nameplate. The door was closed, but the gray-shuttered window of a second-floor room was open, and curtains wavered in a breeze. The shutters of the first-floor windows that flanked the massive door looked like prongs of a pitchfork, grasping and tenacious. But the window above, with its graceful white curtain, was hypnotically inviting.

As Morty watched the curtains billow and recede, he imagined he could see a figure, like the white and pink-clad Rhoda, or perhaps Vita, step back from the open window. Morty turned to the lawn. The girls had gone, but there was no reason to think they had entered the house. After some thought he decided the vision had been a trick of the light, and the illusion had been born of his preoccupation with the old place and its ghost.
The place might have been old, but its exterior was certainly well kept. The caretaker, an old man the locals had taken to call "Mr. Thanatos" for his surreptitious and taciturn manner, tended the garden and the facade of the unoccupied house. It was possibly the house's benign appearance that merely raised speculation but no fear among the neighbors, who, like Morty, wondered not whether the house was haunted, but by whom.

"You are curious to know whether the inside is as pleasant as the outside, no doubt," came a voice from Morty's right. Mr. Thanatos had surprised the boy with his silent approach, and Morty could only react by nodding dumbly. The old man smiled for the first time Morty could remember and said, "The inside is tidy, for what it is worth, but it has not been 'pleasant' for sixty-five years. You should see it anyway, Morty. You have always wanted to, haven't you?

Morty was astonished at Mr. Thanatos' frankness, and he could have admitted he wanted to go inside very much. Instead, he simply said, "That house is haunted."

"Yes, it is," acknowledged Mr. Thanatos. "But not all ghosts are harmful or even indifferent to us, the living. Some are not even aware they themselves are no longer among the living." Mr. Thanatos sighed and continued, "The ghost that lives there is to be pitied, Morty, and so are the lives of those it has touched."

"I do want to go in," said Morty suddenly. "I want to see inside, please."

Mr. Thanatos regarded the boy for some time. At length, he said, "I need to tend some flowers, Morty, but you go on ahead. I will be in shortly to show you the 'ghost' of Shadeland House."

The massive front door swung soundlessly as Morty entered the house. To his right was a parlor, to his left a broad staircase, and straight ahead a hallway leading to the kitchen. Behind the parlor, toward the kitchen, was a dining room, whose carved oak table was set with decorative flatware and elaborate floral china placesettings for four. Across from the dining room was the hallway wall that formed the side of the staircase. On that wall were three portraits, one of an earnest young couple flanked by another of a handsome boy a little older than Morty and one other frame whose canvas was covered by a velvet drape. Everyone in the paintings wore Victorian clothing, which befitted the furniture, draperies, tableware, and accessories. Though abandoned, the mansion was magnificently maintained throughout.

But Morty was not interested in the mansion's amenities. He stared at the portrait with the velvet cover, convinced the ghost's image was pictured within. To distract his intense curiosity, he ran upstairs to the room where he had seen the billowing curtain. The room was empty except for the metal frame of a simple spring bed. There were unremarkable curtains at the window and an ordinary white shirt hanging in a closet. Morty sat on the bedframe and watched the shirt until it billowed toward him.

Albert Them has been a software designer, support manager, and electrical engineer. He currently teaches college mathematics and enjoys writing stories, humor, poetry, and stage plays. He has directed for the Lansdowne Arts Festival, is president of the board of health and past president of the Allied Youth Council in Lansdowne, Pennsylvania, where he has lived for twenty-three years.