Write a book about Mathews County Post offices, it seemed an impossible job. After a leader 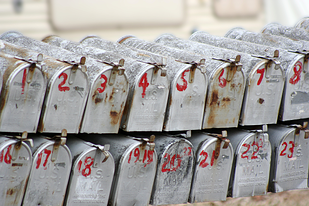 of businessmen and women in our general area read my articles in a regional magazine for over two-years, he asked me to write a book about Post Offices in Mathews County, Virginia. For a time, I felt the idea absurd. However, I had a copy of the initial research that my maternal aunt had done. She spent six weeks during the summer of 1961, worked in the Postal Archives in Washington D.C., and gathered information about Mathews County Post Offices. Then, I contacted the historian of the Mathews County Historical Society and found a wealth of information sat in their files. I spent multiple hours hand copying it. On other mornings when the sun was shining, I drove to the areas and took pictures of any remaining older buildings that housed the post offices in former years. Contact with postmasters that were still living or serving the local offices gave more input for my book. As I wrote about one community after another, the title became obvious, “Walk with Me”.

After spending months researching and writing my books that relate local history, I find promotion and sales a challenge when the first shipment arrives from Infinity Publishing. I live in a rural area with a limited population. However, with one or more reviews in hand, I contact the local weekly newspaper. They not only publish a review, but also send a reporter for a photo and details as to why I wrote the book last published. The ideal is that a review, with an accompanying ad, precedes my first book signing by only a few days. I always have copies of previously published titles on hand at each new book signing. It is unbelievable how many of the older publications I sell.

Mathews County has a Market Days celebration, which is similar to a county fair, the first Saturday after Labor Day each year. I get permission to set up in Mathews Memorial Library on Main Street with books and a pen. It is the largest book sales and signing that I have each year. The library doesn’t make a charge, but I always give them a copy of the latest book.

I appeared on the local radio station once with a new publication. I don’t know how many sales can be contributed to that interview. However, every exposure helps.

It was a surprise when I learned someone had placed “Walk with Me” in the Mathews County archives in the Virginia Library, Richmond, Virginia. The small county had 44 post offices with 38 open at one time. In the nineteenth and early twentieth centuries, citizens walked, rode horse back, or if affluent, rode in carriages to the general store with a post office in the corner for a distance of up to five miles. They wanted to make one trip take care of their needs.

“Didn’t Know We Were Poor” is a favorite with the women. It’s about life in the county before and during the Great Depression. “Photographic Memories Of Mathews County” competes with other photo books, but readers ask for more pictures in another book.

My book about World War II shows how the war affected conditions on the home front as well as overseas. “War Brought Trials and Anxieties …” contains newspaper clippings, diaries, and letters from my fiancé. There is little about actual battles, and more about the emotional affect the war had on both servicemen and those at home.

Catherine C. Brooks has a passion for local history, having lived in Mathews County, Virginia, since birth. She operated “The Craftsman Shop,” a retail fabric store, with a workroom for window treatments/furniture covers business, for 25 years after her husband’s death. Since retirement, she enjoys sharing the history that she has lived. Other than work in a local church and enjoying family and friends, Brooks spends her time writing or telling about yesteryears. She has found life in Mathews, a rural county on the Bay, where few farms remain as they did the first decades of her life, worthwhile. Her first book, “Walk with Me,” continues to be in demand, and calls for “Didn’t Know We Were Poor,” War Brought Trials and Anxiety,” and “Photographic Memories of Mathews County” increase. Her church denomination’s newsletter and several magazines have published Brooks’ articles.