Today we're featuring an interview with Caroline Ludovici, author of The Obsidian Mask. Our author interview series provides an opportunity for our readers to get to know our authors on a deeper level and also learn more about the types of books we're publishing.

Originally from London, Caroline Ludovici always loved traveling to distant lands, experiencing different cultures in far-off corners of the world. Even from an early age she would read and absorb books on ancient history, indigenous peoples, exploration and archaeology. It wasn’t easy; she’d always struggled with reading and spelling. Surprisingly writing came easily to her. Caroline was never able to share her stories though, for fear of being ridiculed for the spelling mistakes. That is, until spellcheck. Now she writes openly, to her heart’s content, and shares her adventure stories, that all contain a little piece of her, and her experiences. 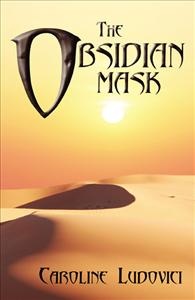 A fast moving adventure, Natasha, fifteen, flies from London to the Middle East with her brother to join their mother for the Holidays, where she works on a ‘dig’ for an international team of archaeologists. But upon their arrival, things don’t go quite as smoothly as expected.

The team has recently discovered the tomb of an ancient Mesopotamian Queen. Marcello, the director of the dig, is ecstatic at finding it; it is the pinnacle of his long career. The tomb contains skeletons and artifacts, but nothing more fabulous than the Queen’s death mask. Unbeknown to Marcello, others are interested in the Mask too...

Natasha dislikes Marcello, who has interests in her mother. Her resentment is worsened when she is thrown together with his children. A Polish volunteer detects Natasha’s resentment, shows her the workings of the dig, and tells her a story of his own. This leads to Natasha’s first crush. But things quickly change for the worse.  The teens are captured and kidnapped for The Obsidian Mask.

Exciting, insightful, tender, and very thought provoking. This adventure feels so real that you will come away with the feeling you were actually there!

The Obsidian Mask is an adventure of a very different kind. Set on an archaeological dig with a very dramatic backdrop in the Mesopotamian desert, it is down-to-earth and believable, with real characters that the reader will get to know very well. The first in a series, Natasha and Alex from London meet Lorenzo and Gabriella from just south of Milan, who have all flown out to the dig to stay with their archaeologist parents who have just unearthed the amazing tomb of an ancient warrior Queen, previously thought to be only legend. Almost as soon as they arrive, the fast action adventure begins with the four teens being kidnapped for one of the incredible artifacts excavated form the tomb. The reader not only has an exciting, life-like adventure, but learns a little about the workings of a dig, and can’t help feel the enthusiasm and excitement of unearthing such an important find with the characters in the book. It is also a very heartwarming family story with an underlying thread that continues through the series. Readers from 10 to 100 will enjoy this book!

Who is you favorite character in your book and why?

I love all of them in their own way, but I would have to say Marcello is my favorite. He is the director of the dig, and world renown archaeologist. He is a widower with two teenage children, and he never really got over the death of his wife, and even avoided going home to Italy because of the memories in the house. He is passionate, sentimental, and warm hearted. He loves his job but sometimes finds the mass burials he excavates emotionally draining. He falls for Natasha and Alex’s mother. This is the underlying thread that continues throughout the series.

While the children’s book market is flooded in fantasy, The Obsidian Mask, is the first book of an exciting trilogy which is firmly based in reality. This adventure is a refreshing change, giving the reader something believable, interesting and true-to-life to read. The market seems to be flodded in morphing teenagers and werewolves at the moment!

The concept of a modern day story loosely set around an archaeological dig in the Mesopotamian desert, is pretty unique!  The book is not only suspenseful, with four young teens of archaeologist parents being held for ransom for a priceless ancient death mask, but it is also thought provoking and tender, following the thoughts and sentiments of a girl coping with her mother’s new relationship, and her own first crush. The reader also gets a unique glimpse of the workings of an archaeological dig and learns, along with the characters in the book, the importance of preserving an historical site such as the one where the priceless Obsidian Mask is being excavated.

Who designed the cover?

I had an idea of what I wanted, and then called Infinity for a meeting with Ivan.  Ivan and I sat down together and went through many pictures on line and came up with this cover that we flipped and altered a little until it looked as lovely as it is!

Do you like to write series? Or single titles only?

I like to write series, as the characters keep coming back in my head. They are so real to me, I think I would miss them if I thought I wouldn’t be writing about them any more…

Can you describe your heroine in one sentence?

Natasha is sensitive and a little grumpy, trying to cope with her parents divorce and her first crush.

Without giving away details, Can you describe one interesting scene in your book in less than two sentences?

Early morning, before the sun begins to warm their backs and  while the camp still sleeps, a young Polish volunteer Yanni, walks with Marcello, the director of the dig, to the area excavation that they have been lovingly uncovering for the last few months. They have come to have a sneak peek underneath the last, small section of mosaic floor still to be exposed, that hides the face of ‘his’ ancient warrior Queen, who, until her discovery, was thought to be merely a legend.

I think about what I would like to find out if I was a teenager with archaeologist parents, as the children in the books are. I also like to tell my readers something, through he characters in the book, about history that might not be taught in school. My notepad is in my head.  I have traveled extensively around the world and my stories and experiences creep into the books.

State 5 random facts about yourself.

I play tennis, I have lived in Sweden, and New Zealand, I was captain of the fencing team at boarding school, I speak and write a bit of Farsi. I have an interesting family history, from Popes to artists.

I grew up in a lovely area of central London. I was very lucky. I traveled a lot with my family and after I left home I travelled even further afield. I have always been drawn to hot, desolate places and have love traveling to countries with different cultures to my own. I haven’t written a book with a plot in London yet. But I will! I have some ideas up my sleeve!

For more information about Caroline Ludovici and The Obsidian Mask, visit: