Malignant Medical Myths: Why Medical Treatment Causes 200,000 Deaths in the USA Each Year… 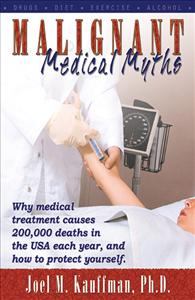 Ads and advice from authorities on drugs, diet, exercise, alcohol, radon, mammograms, and water fluoridation are often wrong and commercially motivated. Find out why by learning how clinical trials are corrupted.

Cholesterol is always present in our blood, and is necessary for life as an essential component of membranes, of nerve junctions, and of brain function (Mauch et al., 2001), and as a source of hormones. The common and true observation that low-density-lipoprotein (LDL) is the form of cholesterol delivered to the cells does not make it bad cholesterol, since all cells need it to function, especially in the brain. Raised blood serum total cholesterol (TC) and LDL levels fail all tests as a necessary cause of atherosclerosis or its cardiovascular disease (CVD) form (Sutter, 1994).

Among the elderly the effects of low TC and low LDL were found to be deadly. In a study on residents of northern Manhattan, NY, 2,277 subjects were followed for 10 years. Two-thirds were female and of the total one-third each were Hispanic, Afro-American and white. Subjects were 65-98 years old at baseline, mean age 76. The chance of dying was twice as great in the lowest quartile of TC or LDL levels, while HDL and triglyceride levels were not related to all-cause mortality in this age group. Women had higher baseline TC and LDL levels (206 and 124) than men (191 and 117), yet the women lived longer. Men with the same TC and LDL levels as women lived as long. Of the subjects, 1/5 were taking statin drugs to lower TC and LDL, which would have pushed them into the lowest quartile (Schupf et al., 2005). This is an excellent confirmation that high TC and LDL levels are beneficial, certainly in the elderly who are most likely to be prescribed a statin drug. The emphasis on the value of lowering LDL, rather than on lowering TC, taken by Big Pharma in the last few years, is invalidated by this study.

Serum TC rises naturally with age from a mean level of 178 mg/dL in 18-24 year-olds to a maximum of 230 mg/dL in 55-64 year-olds (Mann, 1977). Men over 55 and women of all ages who have the highest cholesterol levels live the longest, since high TC protects against CVD and infections (Ravnskov, 2003), as well as the afflictions listed previously cancer, trauma, or digestive system ailments. The rise in TC with age is accompanied by the greater likelihood of dying at greater age from any cause. As an example of a similar effect, people develop more skin wrinkles as they age, but no one thinks that the greater number of wrinkles causes death, or that removing the wrinkles will put off death.

An observational study from the University of Innsbruck, Austria, on 150,000 subjects showed that low cholesterol levels predict premature death in men af all ages, and in women over the age of 50 (Ulmer et al., 2004).

Therefore, the TV ads for Lipitor showing one man of a pair of the same age, the one with high cholesterol, running into a door, or a woman with high TC collapsing in the street, or a body in a morgue to symbolize death from high TC, have no basis in fact. In my opinion, the Federal Trade Commission and the FDA are derelict in allowing these ads to run anywhere.

The National Cholesterol Education Program (NCEP) guidelines to desirable TC levels were of no value in predicting the existence of calcified plaques in coronary arteries as shown by two separate studies utilizing electron beam tomography to visualize the plaques (Raggi et al., 2001; Hecht et al., 2001). There was simply no correlation of serum TC with the existence or extent of late-stage (calcium-containing) arterial deposits in either of these two completely independent studies. This merely confirmed a study from 1936 in which a pathologist and a biochemist from the Department of Forensic Medicine at New York University found no correlation between the degree of atherosclerosis and serum TC in a number of individuals who had died a violent death. (Ravnskov, 2000, p118; Ravnskov, 2002a)

Patients with baseline LDL levels of 84, 117 and 158 mg/dL were given large doses of statin drugs to lower LDL levels to 76, 74 and 85 mg/dL. After about 1.2 years electron beam tomography showed no difference between the groups in the amount of plaque progression (Hecht et al, 2003). Thus LDL levels both pre- and post-treatment with statin drugs in 176 patients with moderate atherosclerosis were equally as useless as TC as predictors of atherosclerotic plaque progression.

In the huge INTERHEART study on 30,000 subjects in 52 countries, the effect of many modifiable risk factors on heart attacks was studied. Smoking led the list, but total cholesterol (TC) and LDL were not even listed, perhaps because the outcomes were not the ones desired by some of the sponsors of the study, which included AstraZeneca, Novartis, Aventis, Abbott Labs, Bristol-Myers Squibb, King Pharma and Sanofi-Synthelabo (Yusuf et al., 2004).

Since high TC is beneficial, except in the 0.5% of people with an inherited condition called familial hypercholesterolemia where TC >400 mg/dL, there was never a valid reason to lower it. Even screening for cholesterol is not worthwhile, and is said to be a waste of resources of the UKs National Health Service, since it is such a poor predictor of who will have CVD (Kmietowicz, 1998). The opposite stance, a steady drumbeat of bad cholesterol bashing supporting the NCEP, can always be found for a quotation in the media, including promotion of high-carb diets (LaRosa, 1996). Advertising cholesterol-lowering drugs never lets up.

To learn more about this book and the author click here...