Originally published and courtesy of curledup.com. 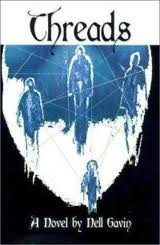 Anne Boleyn was second of Henry VIII's eight wives and the mother of one of England's greatest monarchs, Queen Elizabeth I. Anne and Henry's relationship and subsequent marriage resulted in the formation of a new church in England, as well as the deaths of many British subjects who held fast to the Catholic faith. But what is remembered most about this union was how Henry dissolved it. He had Anne beheaded.

Threads is not your run-of-the-mill historical novel. In the first chapter, we meet an already executed Anne, busy piecing together the story of her life in order to understand why Henry did what he did. We also learn early on that Anne and Henry had shared many previous lives, along with other people that they knew -- daughter, even Anne's first love. Nell Gavin's imagination shines through as the author assigns different roles in their previous lives -- mother as her daughter, Henry as a gay cross-dressing prostitute in 2437 B.C. Egypt, Anne as the wife of a seventh son in 1666 China who forces her to kill her first child because it is a girl.

As Anne reviews her previous lives, she realizes that from each one, lessons are learned. Because she had free will, she had the ability to choose between right and wrong, and her choices determined whether she would be punished or rewarded in the next life. But if there is a "message" within the novel and this is it, the reader can only wonder what wrong choice, outside of committing murder, could one make that would result in his or her next lives ending in murder? Or can bad karma, accumulated over a lifetime, result in one horrific moment in the next?

Author Nell Gavin's research is meticulous, down to providing readers a look at Anne's final speech on May 19, 1536, at the Tower of London, which clearly shows Anne was not real sure why Henry was having her executed:

Good Christian people, I am come hither to die, according to law, and therefore I will speak nothing against it. I come here only to die, and thus to yield myself humbly to the will of the King, my lord. And if, in life, I did ever offend the King's Grace, surely with my death, I do now atone.I pray and beseech you all, good friends, to pray for the life of the King, my sovereign lord and yours, who is one of the best princes on the face of the earth, who has always treated me so well.

Poor Anne. It's good to know that at least in fiction, she could look back on her various lives and see that Henry was not the great man she thought him to be.

To learn more about Nell Gavin please go to http://www.nellgavin.net/.

Reviewer April Galt wasn't always a lover of books. In fact the only books she can remember reading before the age of 20 are a few Trixie Belden mysteries and S. E. Hinton's The Outsiders. She doesn't know when it happened, but at some point books took over her life. A former online bookstore owner, April spends much of her day in Cape Coral, Florida, involved in one way or the other with books. Whether its working on her first novel, creating handmade journals, providing content for her website Book Collecting Online, or simply reading from or adding to her own collection, April's love of books is no longer in question.