Pacific Book Review: The Illegal from Holland by Michael Durack 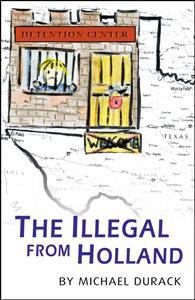 Honesty may be the best policy for going through life, but certainly not the easiest way to pass a US Border Patrol checkpoint when you are with your wife who happens to be in this country on an expired visa from Holland.  So began the spiraling complexity of circumstances stemming from the arrest, detention and deportation of Michael Durack’s wife as he recounts the events of the true story of what happened to them in his book, TheThe Illegal from Holland.

Written in a first-person narrative format, Durack tells of the foibles of the immigration agents as they maneuver detainees from place to place; from hearings to detention centers, from visitor meetings to feedings, and eventually to airports and deportation. Yes, hurry up and wait.  Weeks and months are of little concern as taxpayers pick up the bill for this slow moving processing of non-violent individuals, moving them back to their country of origin, mostly to Mexico and South American countries.

When Michael Durack’s wife falls into this system, he is forced to cope with the circumstances necessary to achieve her freedom from detention, and allow for the correct paperwork for her legal presence within the USA.  This process takes him on a trip of quite a varied journey, throughout Holland and Europe, and over a year and a half before settling back to California as a married couple.

The Illegal from Holland is a fast read, a bit light with regards to impact as the situations discussed are rather mundane and non-eventful.  After all, being caught for simply having over-extended your entry visa seems to be thought by Durack as having the same severity as driving with an expired license, filing a late tax return, or amassing some parking tickets.  Nothing worthy of being instantly detained, or for a better use of terms, jailed.

Michael has written his true story admittedly as his opinion, stating in the forward that to some readers the fact his wife was in violation of the law speaks adequately to the wrath of events that became her ordeal.  Justice, although harsh, is known to those prior to making the decision to remain in this country beyond stated times and consequences should come as no surprise if caught.  His logical appeal is to the reading audience: it’s my wife, a nice girl, and not a criminal – so to speak. I’d wonder what the Dutch would do if the tables were turned, and Michael was illegally in Holland traveling with his wife.  Would they say, “Fine, have a nice day Mr. Durack and please leave soon?”  Perhaps that could be a good concept for a sequel.