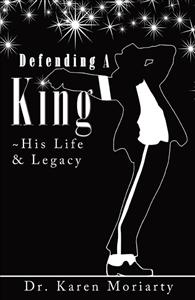 The last four years of Michael Jackson’s life are revealed by Infinity author Dr. Karen Moriarty in "Defending A King ~ His Life &Legacy."

Understanding that “bizarre behavior is normal in bizarre circumstances,” Moriarty leads readers carefully through the maze of stunningly bizarre events and circumstances of Michael Jackson's life.  With previously unknown revelations, the King of Pop is disclosed as a complex and vulnerable man who lived—and struggled--at the pinnacle of human existence.

In the wake of the disturbing manslaughter trial of Dr. Conrad Murray, in which the defense and often the media sordidly tried to put Michael--the victim of the crime--on trial, Dr. Moriarty helps readers understand the unique struggles of this inspirational genius and worldwide humanitarian.  This is the first published book that covers the Conrad Murray trial--including the sentencing hearing in November 2011—and its lasting impact on MJ's family, fans, and legacy.

Incorporating more than 200 sources, including newly-reported accounts from a variety of people who knew Michael intimately, Dr. Moriarty reveals also where he went and what he did during those last four mysterious years of his life.

"If you want an eye-opening portrayal of the real Michael Jackson—delivered in a rare blend of disclosure, respect, insight, and passion—this is it!" - endorsement by MJ's AttorneyThomas A. Mesereau, Jr.

For more information on “Defending A King: His Life and Legacy” visit:  http://www.defendingaking.com