Fiction Crime Thriller is Featured Book of the Week

Book PR is alive and well for author Tom Cirigano.  This Wednesday morning February 15, at 9:15am, his book 67 Cents: Creation of a Killer, will be featured in the "Book of the Week" segment on WVBF Radio, Taunton Massachusetts.   This Wednesday's appearance is a 15 minute segment, (9:15-9:30) and Tom is also scheduled again for an hour show on this station within the next few weeks.  Listeners can call-in to both of these shows or listen to the interivews online.  (WVBF)www.hometowntalkradio.com

Tom has been diligent in doing his outreach to the local media and not only is he getting radio coverage, he’s also been interviewed by Bill Abramson from the New Bedford Standard Times.  The article in the local newspaper will be out in the coming weeks.

Within his newly released book, native Bostonian and author, Thomas M. Cirignano, brings his readers into the tough neighborhoods and back alleys of Southie, during a time when street-justice ruled, judgment was final, and penalties were severe.

67 Cents: Creation of a Killer is a fictional adaptation of the author’s autobiography, The 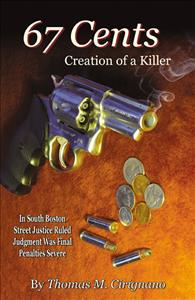 Constant Outsider: Memoirs of a South Boston Mechanic. But fair warning: 67 Cents is not for the faint of heart, with its gritty language and graphic scenes of violence.  The author defends his use of strong adult wording by stating, “This is exactly the way guys of the type depicted in the book spoke.”

In real life, Cirignano lived and worked in a city that was a far cry from TV’s Cheers and the sterile images of fashionable Newbury Street. At his auto repair shop in the heart of Southie, he had multiple opportunities to become involved with the underworld. As their trusted mechanic, he was on very good terms with the local gangsters. So much so, that when the Mob heard that Tom was having a problem with one particular thug, an “enforcer” offered to kill the man for him, for a very minimal fee. Of course, Tom said “No thank you.”

But in 67 Cents, the main character, “Nick,” says “Yes” to each and every one of those offers that were made to the author by both the Italian and Irish Mobs over the years. In a Boston where violence and lawlessness ruled, a series of wrong choices leads Nick down an ever intensifying path of no return. He learns to bend the rules, put aside his childhood values, and break the law in ever increasing ways. Nick finds that, like a lethal drug, money has a power of addiction all its own, especially easy money.

One skill he acquires is that of brutally fighting back against adversaries, eventually being pushed to the ultimate act of revenge; murder. Not only does Nick find that he’s good at killing, he actually enjoys it!

67 Cents: Creation of a Killer is now available in paperback, at www.buybooksontheweb.com, Amazon.com, Kindle, Readmore Books in Taunton, Somethin’s Brewin’ in Lakeville, and Lakeville Library. To learn more about Tom Cirignano go to  www.TheConstantOutsider.com.