6 Rules of Fiction From Preston & Child

Douglas Preston and Lincoln Child are the dynamic duo behind the Pendergast thriller series. Their first book, Relic, was made into a movie by Paramount, and they've collaborated on 26 titles since 1995. After working together for over 20 years, they've perfected many aspects of writing bestselling fiction. Here they share some of their best advice for authors. 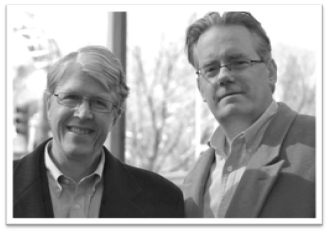 Writing is Your Job

According to Child, you should block out some time every day and put it on your schedule. Preston adds that it's important to make sure others don't interrupt you when you're working. After all, you don't stop by their office in the middle of their work day. Make sure they know that writing time is sacred.

Don't Info-Dump Your Characters' Back Stories

The pair think that too many writers today spoon-feed their readers with too much of their characters' pasts. Their advice is to develop your character by his actions and words, letting the reader slowly discover who this character is by going through the story with him.

According to Preston, you shouldn't take the "show, don't tell" rule too literally. Instead, you should be thoughtful about where and when you tell things to your reader.

In Child's mind, "write what you know" is a rule that should be completely discarded. He thinks that if authors only write what they know, we'd have a very boring collection of books in the world. There's a reason authors can do research, and it's so they can add interesting detail to books other than that from their own life experiences.

Know When to Stop

The worst place to stop work each day is at the end of a scene or chapter. Both authors agree that you should stop in the middle of some action, when you're just dying to work some more and get the scene on paper or the screen. When you start work the next day, you'll fall right back into the scene and drop into the flow right away.

Don't Write to Market -- Sort Of

There's nothing wrong with writing in a popular genre, but Child thinks it's more important for authors to write the kind of books they love to read. The interest in the subject matter will show in your writing. Preston adds that too many books are cropping up with the exact same tropes. Instead of adding another book with the same basic details, create something that makes other authors wonder why they didn't think of that themselves.

Check Your Ego at the Door

Don't treat every word you write like precious treasure. If your beta readers or editor suggests you cut a section or change some scenes around, listen to them. You've got a team in place for a reason. Trust their judgment and make the cuts. Your writing will be better for it.