In his exit interview with Cop Shop before he retired in September, 2010, John M. Roman said his 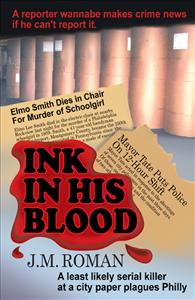 path to what turned into a nearly 40-year writing career with the Delaware County Daily Times really began a dozen years prior at Thomas A. Edison High School — where he was a writer and later editor-in-chief of the school newspaper.

Now that he’s authored the thriller novel, “Ink in His Blood,” those words have taken on even more meaning for our resourceful former colleague, working under the pen name of J.M. Roman.

“It’s a dream I had,” Roman, a resident of Delaware County, said of writing a book.

According to the jacket promo, “A least likely serial killer is stuck filing stories in the morgue of Philly’s largest newspaper. The obsessed wannabe reporter makes crime news if he can’t report it. Young women he waits on wind up being his victims. Charlie Murray, a street-smart reporter and Vietnam War vet, becomes a target as he digs into the random murders. He and two homicide detectives scour Penn’s campus and the ritzy Main Line for the clues before the killer strikes a fourth time.”

Hooked yet? You should be. It’s a great read and we couldn’t be more impressed by our friend.

But don’t just listen to us.

“Think Pete Hamill. Jimmy Breslin or Pete Dexter. Roman’s experience make him uniquely qualified to take readers inside the Philadelphia Evening Star during the last great age of big-city newspapers where a morgue clerk named Frank Stocker would kill to be a reporter — literally! And the bodies start to pile up. Ink in His Blood has all the elements of a gripping thriller — murder, sex and a fast-paced plot,” offers nationally syndicated talk-radio host Michael A. Smerconish in one back-cover testimonial.

“J.M. Roman illustrates that journalists know more about things than nearly anyone else. Sometimes what they know is important stuff, but their captured facts are more often odd, or disturbing, rather than important. Ink in His Blood serves up some of that incidental, off-beat knowledge along with plotting by the author that is meticulous as that of his protagonist police reporter, Charlie Murray,” says Stu Bykofsky, Philadelphia Daily News columnist, in another testimonial. Continued...