Terry Harris is the host, co-writer, and co-producer of the Chinese Acupressure Facelift video– a nationally distributed video. He is the host, writer, and producer of the Renaissance Series, a video series on the Arts. Mr. Harris has acted in a rich variety of television commercials, corporate videos, plays, and modeled extensively in national print advertisements, and is a self published author. 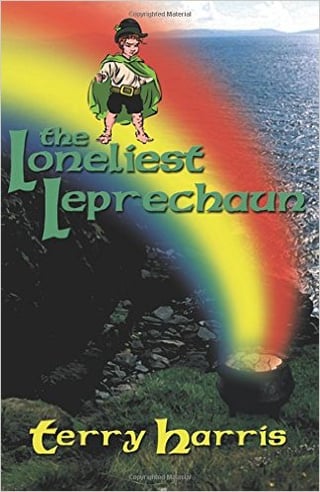 
The Loneliest Leprechaun is a fantasy adventure allegory about Sean O’Shaughnesy, a leprechaun from the heart of Ireland. It is an adventure that takes the reader from a leprechaun’s treasure cave, to the wings of a white wave eagle, and the visionary undersea realm of Tir Na Nog, the land of eternal youth in Celtic/Irish mythology. From the Ice Kingdom of the sinister Tuatha to the magnificent rainbow ride, The Loneliest Leprechaun sparkles with vivid imagery and fantastic adventures for young adults and the young at heart.

For more information or where to purchace this book: Click Here

Sneak Peek: Or Click Here to hear the author read his book!

On a hot, humid August evening in 1986, I was walking from the bedroom to the living room of my family's home in Stone Harbor, New Jersey. As I approached the tan door that led from the bedroom to the living room, a voice from deep within my consciousness called out, "The Loneliest Leprechaun!" I stopped. "The Loneliest Leprechaun." I turned. The voice was so clear, so distinctive, so real, that for a moment, I actually believed that someone was in the room with me. I was, of course, alone. But the voice was so firm, and so distinctive, that I could not ignore it. It was as if the voice had come from another realm - perhaps my higher mind, or perhaps the very universe. Yet the words were unmistakable - "The Loneliest Leprechaun." I did not know what to make of that psychic experience, but the next day I commenced the book, The Loneliest Leprechaun, and immediately became intrigued at the very manner in which I wrote it

Over the next few months, images for this book came to me in dreams. It was if my higher mind was actually dictating the book to my conscious mind. I truly felt that the spiritual universe had beckoned me to write this fantasy - adventure allegory for children and young adults. I do not consider myself a spiritual person per se, but this book came to me in a way that no other literary work has ever come to me before or since. It's as if the universe wanted me to share this parable - this allegory with all that would listen, young and old alike.

And so, I now share with you the words and images and feelings that flowed to me on that humid evening at the Jersey Shore ... the images and the voice from within ... the allegorical fantasy adventure of The Loneliest Leprechaun...