Trained in intelligence and counterintelligence, Grayson authored three military histories. Leading USAF units in the US, Europe, and Vietnam, he was NSA’s Transmission Security Chief at the time of his retirement. He provided security support to the White House, AF-1, joint commands, defense and intelligence agencies, and NATO. After NSA, Bill was a Commerce Department Telecommunications Specialist, securing networked computers of whole federal civil agencies, accomplishing missions in Latin America and aboard Customs Service AWACS aircraft, and then joined Northrop Grumman. Currently at a Washington think tank, Bill is a self published author, lives in Maryland and is a frequent visitor to the Delaware shore. 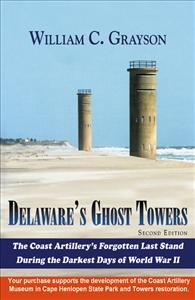 Right after Japan’s Pearl Harbor sneak attack and Germany’s declaration of war, America had no effective naval or air defenses against enemy warships and submarines closely prowling her shorelines. As Japan shelled California and Germany sunk ships off Atlantic beaches, invasion by bloodthirsty savages was anxiously feared. During those frightening days, the Coast Artillery manned the front lines. Focusing on the defense of Delaware Bay, Delaware’s Ghost Towers describes the big guns, spotting towers, targeting processes, and service of soldiers responsible for protecting citizens and the American homeland. Profusely illustrated with photos, diagrams, and maps expressly drawn for the book.

For more information on where to purchace this book: Click Here

At Least I Know I'm Free: The storm clouds over the western democracies since 1979 strikingly resemble the frightening 1930s climate that forewarned the horrors of World War II. Then as now, detached people and their anti-war leaders were swayed by wishful thinking that faraway troublemakers could be reasoned with and that they would keep their distance. Delaying until it was almost too late, democracy’s citizens paid a terrible price in the 1940s for their leaders’ naive tardiness. At Least I Know I’m Free takes a “what-if” look at how the decision not to fight by Western leaders could have cost Americans their basic rights and freedoms.