Thomas M. Cirignano was born in Dorchester, Massachusetts, in 1952. As a young man Tom moved to South Boston taking over the father's auto repair business. While living and working in "Southie" he experienced, first-hand, an era of unbridled crime and violence during mobster Whitey Bulger's reign of terror. Based on those experiences, Cirignano authored two books, The Constant Outsider: Memoirs of a South Boston Mechanic, and 67 Cents: Creation of a Killer.

Tom is a certified scuba diver, ultralight aircraft pilot, has owned several motorcycles, self published author,  and loves boating. Tom has been a contributing writer to The New Bedford Standard-Times Newspaper and also served as an advisory member on The Standard-Times Editorial Board. 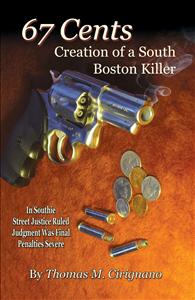 
During the 1970s & 80s, South Boston was an environment of extreme crime and violence. Seemingly innocent circumstances could turn an ordinary man into a brutal killer. Within 67 Cents: Creation of a Killer, you will meet Nick; a young man who thirsts for respect and acceptance, and thus he can't seem to say No to mob requests. At his South Boston auto-repair-shop, he is slowly drawn into the underworld, accepting increasingly risky assignments.

His large, secure garage is the perfect place to store hijacked trucks, hold covert meetings, and much more.  In the midst of his dangerous and complicated environment, Nick finds rare moments of peace and comfort under the strangest of circumstances, but trouble lurks around every corner. During an existence that is spiraling out of control, dishonesty sows the seeds of deception. The resulting violence calls for the ultimate revenge; Murder. Not only does Nick find that he's good at killing, when push comes to shove, he actually enjoys it!

The twists and turns will leave you wondering, "Does it truly end this way?"

People who aren’t familiar with the name “James Whitey Bulger” can become acquainted with that him by seeing the movie “Black Mass”. “Whitey” was the most notorious and vicious gangster in Boston’s long history. In South Boston, he was both feared and respected. His trial began in March 2013 here in Boston. The charges against him include nineteen murders. (that they know of) Whitey was finally captured in California after sixteen years on The FBI’s Ten Most Wanted List.

During the height of his reign of terror I was operating an auto repair shop in the heart of “Southie.” On a daily basis, I was dealing with every sort of gangster and mobster that there is. To them it was just their job, and I became a friend and confidant to many of them. They loved to hang around my shop and have a few beers. Thus, I had to walk a fine line between coexistence and full cooperation just to survive within that lawless and extremely violent environment. Needless to say, my experiences were not typical or ordinary. In fact, they were surreal by most people’s standards.

For more information or where to purchace this book: Click Here

An interview with the author:

I had previously written my true life’s story, titled, The Constant Outsider: Memoirs of a South Boston Mechanic. That book depicts my reality; a life lived pretty much on the straight and narrow, yet with more than its share of excitement and danger. But just under the surface, I’ve always wondered how my life would have evolved had I said “Yes” to each and every offer that was made to me by the mob. Those offers were substantial over the years, even including an offer to kill someone for me. All I had to do was give the go-ahead and pay 67 cents, the price of the bullet. In writing 67 Cents: Creation of a South Boston Killer I explore the life I could easily have had, to see where it most likely would have led. Readers will see lots of similarities to the events within my true memoir, The Constant Outsider, and 67 Cents, the fictional version. With just a few alternate choices during one’s life, everything changes dramatically.

Who is you favorite character in your book and why?

I think my favorite character in the book is the main character’s love interest. She comes from an extremely unique and challenging background. In sharp contrast from what you would expect after knowing her history, she shows great virtue. Based upon the way I would talk about this character while I reviewing those related segments of the book with my wife, she accused me of actually loving this character! That’s when you know you have created a great character, when even the author becomes obviously attached to her! That’s the beauty of writing fiction. You are free to let your imagination run wild!

While written as fiction, my book gives readers a true sense of the atmosphere on the streets of Southie during my years there. It was written to reflect the way things really were. I am able to state this because I knew people who did many of the things depicted in the book. Through hearsay, I was privy to much of what went on during those violent times. Thankfully, in most cases I was able to maintain a safe distance from actual involvement.

I always keep a notepad and pen on my nightstand. Most good ideas often come to me in the middle of the night. If I don’t write those ideas down right then and there, the thought is completely gone in the morning.

Who or what inspired you to become a writer?

It was friends and family who inspired me: people who knew my history and insisted that my story was unique, and it needed to be shared in book form.

Do you have a specific writing style?

I’ve been told many times by my readers that they feel as if I’m having a conversation with them as they read my books. I’m just talking to them. So, I guess that’s my style.

What are your strengths as a writer?

I just want to leave a lasting legacy for my family. Of course, seeing a movie result from my writing would be wonderful.