Tim Sommer beat long odds when he signed a professional baseball contract to play for the Baltimore Orioles organization. Norwalk, Ohio did not have a high school baseball team and there were few scouts covering the rural areas he played in during the summer. His 8 year career as a player and 2 years as a scout provided him with a broad overview of professional baseball.

After retiring, he kept active as a pitching instructor for local youth in Elmira, NY, and Now has gone one to be a self published author. 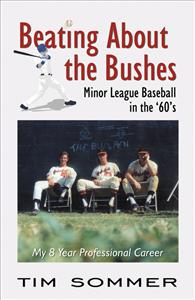 Beating About the Bushes: Minor League Baseball in the 60's

The '60's were the beginning and end of the age of innocence in many facets of life. Professional baseball players still played for the love of the game and not money. Today's average major league player makes more in one game than the average yearly wage in 1960. No one had an agent since there was no free agency and no bargaining power. BEATING ABOUT THE BUSHES contains amusing, informative and controversial elements providing the reader with an understanding for what every player faced. The Club was the plantation owner, you were the slave, and there was no hope for escape.

For more information or where to purchace his book; Click Here

Beating About the Bushes allows the reader to ride the emotional wave of Tim Sommer's eight year professional career starting with the realization at age 12, I was the “big fish in the small pond”.

Beating About the Bushes will soon be an addition in the Baseball Hall of Fame library!