With an ongoing interest in baseball that began at an early age, Douglas Williams pursues the history of the game by connecting with many of the people who helped shape it. He carries a deep appreciation for the rich, alluring past of our grand old game as well as the individuals who took the field when it truly was our national pastime. A noted baseball author and historian, and self publishied author, Douglas resides in Gloucester, Virginia. 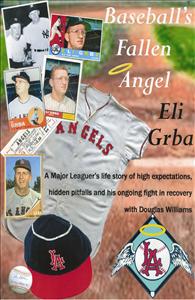 A beautiful home and family, and a promising career in baseball were all his for the taking until the demons of alcohol addiction took them all from him.
In his autobiography, Baseball's Fallen Angel, Eli candidly recalls his lonely childhood in South Chicago, his successes as a scholastic athlete and his bizarre stint in the U.S. Army. He also delivers a personal, season-by-season account of his life in professional baseball, recounting his triumphs as well as his disappointments.

Baseball's Fallen Angel is the true story of a major league pitcher who fought his way back from the depths of addiction to ultimately score the most thrilling victory of them all, a come-from-behind win in the game of life.

For generations becoming a major league all-star pitcher and playing for the New York Yankees have been wishful dreams for millions of hopeful young boys. The number who actually realized either of those dreams is extremely small. Jim Coates is one of the few who accomplished both and reached the pinnacle of Major League Baseball as a World Series Champion. Along the way, he was forced to face many painful hardships, disappointments and criticism, which all served to strengthen him and make him even more determined to come out on top. Always a Yankee is the inspirational story of a man who rose above his humble beginnings and made the most of the talents he was given.

A Pirate's Journey: Years ago Hank Foiles was a major league catcher. Prior to that, he was an exceptional high school athlete who excelled in baseball, track and football. In his autobiography A Pirates Journey, he retraces his steps from his boyhood to high school and on to professional baseball, where he was eventually named to the National League All-Star team.

Foiles shares stories of long bus rides in the minors, team executives who broke promises and his struggles with injuries. Yet in spite of many disappointing setbacks, he remembers his days in baseball as a dream come true.