Larry Tart has lived the history about which he writes. He served in USAFSS for twenty-one years, retiring as a senior master sergeant in 1977. Trained as a Russian linguist, he had seven overseas tours (England, Germany, Japan and Greece) and logged 3,000 hours conducting aerial signals intelligence reconnaissance—receiving eleven Air Medals and three Meritorious Service Medals. Instrumental in creating the Aerial Reconnaissance Memorial dedicated in Maryland in September 1997 to C-130 60528’s shot-down crew, he was inducted into the Air Intelligence Agency Hall of Honor in 2000 and published The Price of Vigilance, about the shoot down, in 2001. 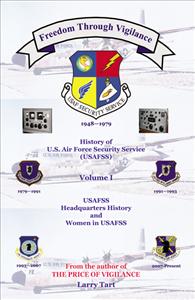 Freedom Through Vigilance is the heretofore untold in-depth history of Air Force Security Service—the smallest, most hush-hush command in the Air Force (1948-1979). The book is dedicated to the tens of thousands of USAFSS silent warriors, who worked in anonymity around-the-clock at some 100 mostly isolated overseas outposts, exploiting targeted military communications during the Cold War. Consisting of 1,600+ pages (three volumes), Freedom Through Vigilance includes hundreds of first hand accounts from all ranks (generals to airmen) involved in creating USAFSS history. Males and females—intercept operators, linguists, cryptologists, analysts, communicators, clerks, maintenance technicians and commanders—describe their personal involvement.

For more information or where to purchace this book, and editions two through five; Click Here

Freedom Through Vigilance is the heretofore untold in-depth history of Air Force Security Service—smallest, most hush-hush command in the Air Force (1948-1979). Written by a USAFSS veteran, and self published author (21 years).