Bryan began his financial career immediately following earning his CPA credentials and Bachelor’s Degree in Accountancy from the University of Illinois. Later he earned his MBA from the University of Illinois Executive MBA program. His career started as a staff accountant for the State Universities Retirement System of Illinois where he eventual became the Chief Financial Officer. After these 19 years of experience in public retirement matters, he worked 5 years in an accounting firm specializing in private retirement plans, before beginning his current tenure at Chesser Financial, an independent financial consulting firm.
Bryan earned Million Dollar Round Table membership within four months at Chesser Financial. 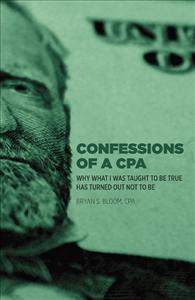 Confessions of a CPA: Why What I Was Taught To Be True Has Turned Out Not To Be

If what you thought to be true turned out not to be, when would you want to know? Obviously right away! This book is a compilation of eight commonly held financial “truths” that are generally accepted as hallmarks of a sound financial plan. What if they aren’t true? What impact does relying on something that isn’t true have on your financial future?
For example, we have all accepted the miracle of compound interest. If the exponential growth potential were the only factor in play – anyone nearing retirement would be wealthy. .

For more information on self published author Bryan Bloom, and all of his books: Click Here

Confessions of a CPA: The Truth About Life Insurance : A question I get almost every day is: “why isn’t everyone implementing the principles in this book?” The answer to that question is that everyone who understands these financial truths is implementing them. If you carefully read and absorb the financial principles of life insurance uncovered in this book, you will understand as well. There is a finite amount of knowledge that humans know about the universe. All of this known information falls into three categories: First, there is a certain amount of information that we know and that we are aware that we know. We could say that we are “consciously competent” of this information. Second, there is a large amount of information that we know nothing about. We know that there are certain fields or concepts "out there," but we really don't know anything about them. We might say that we are “consciously incompetent” of this information. The third category of knowledge represents information we don't know, and we’re not even aware that we don't know it. We are "unconsciously incompetent" in these areas. It doesn't mean that the information doesn't exist; it just means that we are currently unaware of its existence. As a result, this information currently sits in our "blind spots." Just like in our cars, there are some things we don’t see that others do. But if we just turn our head 20 degrees, we will see things we have never seen before. This book will help you to turn your head 20 degrees and to discover something wonderful that you have never seen before. Victor Hugo (author of Les Misérables) once said: “all the forces in the world are not so powerful as an idea whose time has come.”

Life$cience: Have you ever heard of the “Aha!” experience…when suddenly the answer presents itself, fresh and new? No one doubts that such epiphanies exist. They can be life changing as in the so-called “peak” experience, when reality is flooded with light. We live in a world in which perception becomes reality in the mind of the beholder. This book is not just another retirement planning book. To be successful people need to learn some key “truths” about money and spend some time learning the rules of the game. Many of the things we have been taught to be true have turned out not to be, and this book will shine a light on those untruths so that you can make changes that will improve your financial future. Nobel Prize Winner Albert Szent-Györgyi said: “Discovery consists of seeing what everyone else has seen and thinking what nobody has thought” – we hope you have a similar experience after reading this book. When we set out together on this project, we decided that the best thing we could do for you was to look at your overall picture and what are the main issues that you are faced with every day. In the following pages, you will look at some of the things everyone has seen, but think some things you have never thought before. If what you thought to be true, turned out not to be, when would you want to know?

Dental Wealth: We live in a world in which perception becomes reality in the mind of the beholder. The perception is that dentists are swimming in cash the day they graduate from dental school. Dentists are among the brightest and most successful in society, and certainly you need not worry about money after your practice is established. You can do very well financially if you are smart with your money but, as you know, it takes time and it takes years to truly build a practice to the point where the business model is running on all cylinders. A successful Dental practice has a cohesive and committed staff of professionals working alongside of you, as well.