Bill Sunkel has lived and worked in New York City and its surrounds his whole life. He has written, recorded and performed music professionally for five decades, including with Rock’n’Roll Hall of Famer Felix Cavaliere. In 1988, Bill became a practicing attorney, and has been with the same law firm for 26 years. Now age 58, Bill continues to make music and practice law. He loves his family, his music and his cars (especially his bright orange Porsche, the infamous “Flying Pumpkin”), and is still trying to figure out what he wants to be when (if) he grows up. 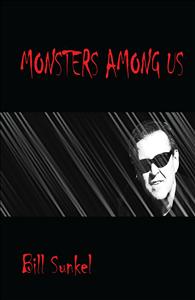 Monsters Among Us is a new book and album by New York City singer-songwriter-self published author Bill Sunkel. The CD album (included) features thirteen new original songs, while the book contains full lyrics, detailed musician credits, deep (and frequently revealing and provocative) backstory about the meaning behind and creation of each song via the author’s fascinating and informative Decoder© notes, and original full-color photographic illustrations of each track, as well as performance photos and other snapshots from Bill’s personal collection. In a world of digital downloads and virtual everything, think of it as the ultimate album cover.

For more information on where to purchace this book: Click Here

Bill Sunkel is a New York City born and raised singer-songwriter who has had the privilege of working with many great musicians, vocalists, songwriters and producers over his career, including The Rascals' Felix Cavaliere and Laurie Records' Gene Schwartz.  He served as lead vocalist and keyboardist for bands like Desperate Measures, Pariah, The Eyes, Rich Mars & The Martians, Plan B and The Kingsbridge Armoury.  At age 57, Bill is more prolific than ever and has returned to full-on active status, with the goal of placing songs with both established and up-and-coming artists.  He describes his songwriting style as "Steely Dan Garage Band," but his melodic, sophisticated, intelligent and soulful songs range from jazz-rock to R&B to country-pop to folk.  He blames The Beatles and Brian Wilson for his schizophrenic style, because they taught him early on that limits and labels can only define you if you let them.  Bill writes and records (and frequently performs live) with his long-time bandmate and longer-time brother, Rob, whose world-class vocal harmonies and brilliant musicianship grace many of the recordings featured on this site.